Surprising news out of the UK this past week: around 50% of the adults in a survey did not recognise that the top listings in Google search results were ads.

Yes, we know, we know. There’s a label next to the ads shown in search results. And it says “Ad”. Granted, the background colour is a muted yellow-orange, and the ads are not flashing on and off every second but… 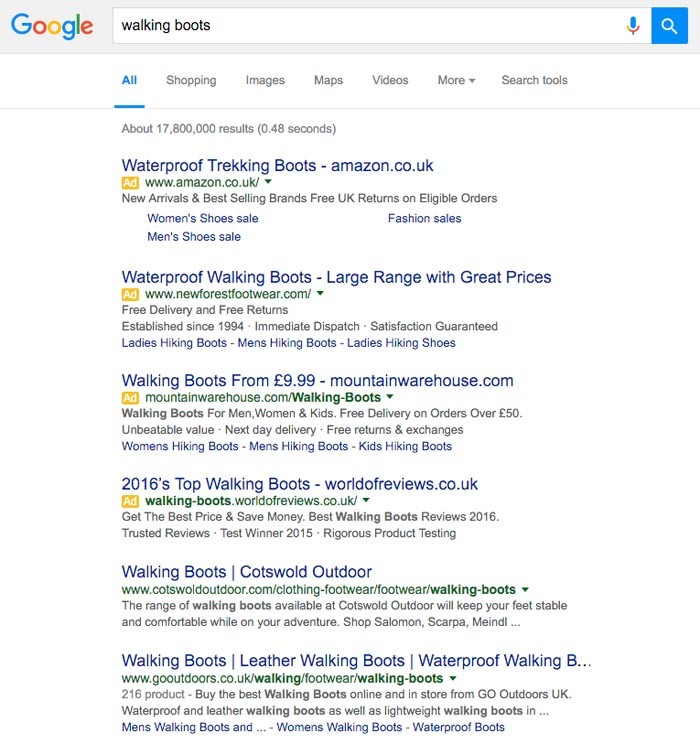 Conducted by Saville Rossiter-Base on behalf of Ofcom (the independent regulator for the UK communications industry), the survey interviewed 1,841 UK adults in-home between September and October 2015. Results were published last week in Ofcom’s April 2016 Adults’ media use and attitudes report.

Among the survey participants, 1,328 “adults who use search engines” were shown a picture of Google’s search results for ‘walking boots’ (similar to that above). According to the study:

“Their attention was drawn to the first three results at the top of the list, which were distinguished by an orange box with the word ‘Ad’ written in it. They were then prompted with three options and asked whether any of these applied to these first three results.”

Respondents were allowed to select more than one answer, say they were unsure or nominate another reason. And surprisingly 40% did not realise the ads were paid links, while only 49% correctly identified them as paid ads (that is, the first option was the only answer they chose).

Newer users (people who first went online less than five years ago) were least inclined to recognise the paid ads: 66% of them didn’t see the “Ad” label.

There are a lot of other interesting questions and answers in the Ofcom study. But paid search ads have been on Google for over 16 years now: that so many searchers still can’t see them as such is a concern.

That’s great news for Google, yes, and for AdWords advertisers struggling with or who can’t be bothered with SEO.

Are UK searchers any more myopic than the rest of us? That’s unlikely, even though the results of this survey are surprising.

We’ve long known, given similar surveys in the past, that not everyone knows a paid search result when they see it, even when it is clearly labelled as such. But what’s interesting here are the percentages: ads may be prominently labelled as such, but we scan search results for our answers. And in the process of selecting the “right” result, it appears many people can’t tell the ads apart from organic and other search results.

That’s great news for Google, and for AdWords advertisers.

Google makes all but a fraction of its revenue from its paid search and display advertising, of course. It’s in Google’s best interests to have people clicking on good paid search ads rather than good organic results.

The addition of site links and other ad extensions (including dynamic structured snippets) has helped blur the differences between paid and organic Google search results. And Google is reportedly experimenting with the colours it uses in labelling ads. But here’s the interesting question: what determines the “better” colour?