Since its launch Bing has slowly been growing its market share. However according to figures released last week Bing’s global search market share faltered in September, slipping to 3.39% from 3.52% in August.

The significance of this minor fluctuation is debatable, however given the extensive marketing Microsoft has been doing to promote Bing as a “Google killer” these latest figures have prompted lots of of discussion both on & offline.

Clearly Microsoft is not everyone’s favourite corporation & so not surprisingly there have been gleeful postings by Microsoft detractors about this fall in market share signalling ‘game over’ for Bing.

Ahh, the joy of schadenfreude!

Do they have a point? After all, recent Google challengers Cuil and WolframAlpha both seem to have faded into obscurity. (When, if ever, did you last use either?). Despite promise of new ground breaking search technologies neither has made any real impression on the Google Juggernaut.

Despite this, if any search engine has a chance of challenging Google it has to be Bing.

But in my opinion it won’t be because of Bing developing better search technology than Google (unlikely as that is), or from Microsoft’s deep pocket marketing. 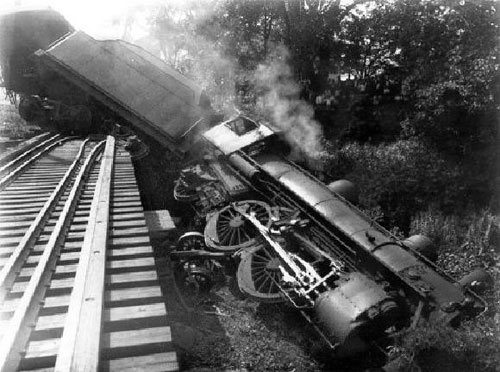 Think of this like a race between trains on the same track. Google is already way ahead down the track running at full steam, whilst Bing is just starting to pull out of the station.

And the only way Bing will ever overtake Google is if Google goes off the rails.

Which is exactly what happened with AltaVista. Ten years ago they were the kings of search and Google was a nobody. But then AltaVista lost their way, turned into a ‘portal’ and started producing crappy search results. Only then did people who habitually had used AltaVista look to alternative search engines. Google was in the right place at the right time, and their ground breaking technology which provided great results did the rest.

A gross simplification, admittedly. However my point is that even with their better mouse trap Google probably wouldn’t have become the top dog in search if AltaVista hadn’t dropped the ball.

Will Google eventually go off the rails & leave the open the door to another search engine? At this point I’d say that whilst possible, it’s unlikely. But if they do, Microsoft is probably the only contender who can last the distance & exploit the opportunity if it arises.

What do you think?