This week: Google Maps adds Uber; Google & Bing want to see your CSS; US stores get creative with mobile apps; and more…

1.Google Maps: We’ll have a car to you in 5 minutes

Sometimes we wonder what we’d do without Google Maps. Not, however, when we’re directed to go the wrong way down a one-way street. And not when we’re sent north across the harbour bridge and told, as we enter a tunnel, that our destination is now on the right.

Our love-hate relationship with Google Maps is about to get a little warm and fuzzier however, following Google’s announcement last week of Maps’ new look for mobile devices.

Google highlighted the “fresh new design” and bold, bright colours. But here’s what caught our attention: the ride-sharing app Uber is now integrated into Google Maps.

If you have the Uber app installed on your smartphone and use Google Maps for directions, you’ll see the wait-time for an Uber pickup. And what price you’ll pay to get to your destination.

In the US, Open Table is also included, allowing users to book a restaurant table directly within Google Maps. And, in a challenge to Yelp and Trip Advisor, it’s just another click to local business reviews, photos and more information.

Bright colours and good looks aside, Maps’ integration with Uber is what interests us. Google is a major investor in Uber, of course, and although Uber is in over 45 countries worldwide it has only recently entered the NZ market. And it’s only as of last month, that Uber became available on the streets of Wellington not just Auckland.

Taxi companies won’t be happy, but this can only help grow Uber’s customer base.

The ability to book a restaurant table from a Google Maps page is limited to the US at present, but it’s likely Google will partner with various companies to provide similar services in other countries. Should Google bring this functionality to New Zealand, companies like Zomato and Restaurant Hub will be winners – or losers.

2. Google & Bing to Webmasters: Show us your CSS

Where we come from, there are few if any parties where Bing is the first to show up and get the party started. And the search engine’s request last week that webmasters not block JavaScript or CSS from its crawlers is a case in point.

Google last month updated its technical guidelines for webmasters, directing they give Googlebot access to their sites’ JavaScript, CSS and image files rather than block access via robots.txt. Implicit with the request was a threat: “Disallowing crawling of Javascript or CSS files…can result in suboptimal rankings”.

Bing made a similar statement last week in announcing five new mobile crawlers designed to render website content as it would be seen by various mobile devices and browsers. Bing Crawl team member Lee Xiong said that it’s “paramount that you allow our crawlers to not only find the core content of the URLs themselves, but that you also allow them access to the necessary resources needed to load each page…including any CSS, script, and image files”.

Xiong also recommended a “power of one approach”: design a single URL/website to be responsive rather than have a mobile specific site and a desktop site.

We think the request from Google and Bing reasonable enough, as search engines don’t necessarily know if a site is mobile or not without CSS access. Be sure first, of course, to use tools like Webmaster Tool’s Fetch and Render as Google to correct any issues in how search engines render the page.

Like Google, Bing also recommends having one site that is responsive rather than having two sites: one for mobile and one for desktop. This won’t, however, be possible for all sites and situations, and a dedicated mobile site, if set up correctly, is better than not having anything for mobile users at all.

3. US stores get creative with mobile apps

Last week we ran a story about Google’s study on how digital is impacting in-store shopping. For those of you with short memories, there were some surprising findings – one of them that many people use a cell phone in-store to check the store’s website or app for product information.

No surprise then that Walmart’s update to its mobile app has since caught our attention, with news that it adds product search to the in-store shopping experience.

Walmart Supercenters are up to 260,000 square feet in size (that’s around the size of three-and-a-half rugby fields). No surprise then that the “Search My Store” feature is the focus of the company’s upgraded mobile app. 

Walmart shoppers can search real-time inventory by product name or keyword to find what they need. Search results list products with prices and a precise location for each item in the store.

Walmart, of course, can use this information to ensure product availability in those stores and locations with the highest demand. But media commentators are already reporting the likelihood that the store will eventually start showing product ads in the in-store search results – allowing manufacturers to purchase AdWords-like text ads, for instance.

And what of Walmart’s best price guarantee? Savings Catcher, also built into the app, lets shoppers scan the UPC or QR code on their receipt. Then, if a competitor was selling the same product at a lower price at time of purchase, the Walmart shopper is refunded the difference.

But Walmart isn’t the only US store that’s…ahem…thinking outside the box when it comes to mobile apps. 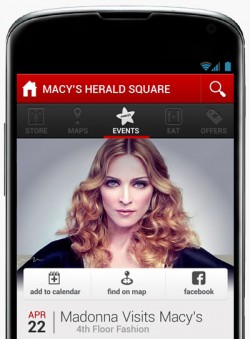 Macy’s mobile apps (there are four) include a store navigation feature, an events timetable, games, competitions, and support for mobile wallet payments. Youth-oriented clothing store Urban Outfitters is trialling use of its loyalty programme app for push notifications based on where the shopper is in the store – checkout line, fitting room or store entrance. Shoppers are, for instance, shown user-generated content about store products. Or they may be prompted to post a selfie to Instagram with a hashtag that means their photo may be featured on the company’s website.

The shoppers’ journey doesn’t end when they enter your store, with many people still preferring to get their information online rather than from a sales person. That presents challenges for brick and mortar retailers, in that they need to provide an engaging mobile experience for in-store customers. Retailers here have the same challenge, but can learn from what’s working in digital overseas (and what’s not).

Our friends at search marketing software company Kenshoo report that, for the second quarter in succession, paid search ads on mobile devices accounted for 44% of all paid search ad clicks in Australia.

Despite relatively high traffic, though, in Australia just 37% of paid search spend is on mobile. However, that discrepancy could, of course, simply be due to comparatively low cost per click rates for mobile.

We’re used to thinking that what happens first in Australia will eventually happen here, and it’s likely to be so with mobile paid search.

Kenshoo has not reported on the NZ market. However, a quick review of our accounts tells us that mobile ads represent considerably less traffic here. But – and it’s a constant refrain from us, I’m afraid – every year the percentage of traffic coming from mobile is growing.

5. Newspaper readership numbers continue to fall – but not online

Rather than admit the obvious, the paper chose instead to trumpet Nielsen figures showing the growth of its combined print and online audience. Clearly, the future – for The NZ Herald and Stuff – means growing online readership and improving online ad revenues, so we can’t deny them the right to accentuate the positive.

The NZ Herald’s print circulation, according to the latest ABC figures, is falling at a rate of 3.5% to 4% each year, despite New Zealand’s growing population. In what was bad news for all but a few newspapers, the NZ Herald reported that it was at least “out-performing other main centre papers”. And, competition be damned, NZME-owned metropolitan and regional newspapers like the NZ Herald were doing better than those owned by Fairfax Media.

Chances are, because you’re reading these news stories online, you don’t, not really.

Personally, however, we lament the decline of the Fourth Estate. And, of course, that reading the news on a desktop or tablet denies us that certain gentlemanly sophistication that comes with hiding behind a broadsheet newspaper, half asleep in one’s armchair.

If you thought all the fireworks on November 5th were because it was Guy Fawkes’ Day, you’d be wrong. That was also the day that Google’s Enhanced Ecommerce for Universal Analytics came out of beta.

Enhanced Ecommerce, you’ll remember our telling you, greatly improves optimisation and analysis for ecommerce websites. In particular, it provides analysts with more data points in the customers’ path to purchase – such as when customers add items to cart, start the checkout process or complete a purchase.

As befits so important a release, Google also published a compelling case study. With Enhanced Ecommerce, Texas-based jewelry design house Brian Gavin Diamonds discovered that in a single month they missed over half a million dollars in sales due to cart abandonment at the customer login page. After improving website checkout flow, the company saw a 60% increase in customers completing the checkout process.

Who doesn’t want an extra half million dollars in sales each month? Adding Enhanced Ecommerce features to Google Universal Analytics makes it easier to identify and correct pain points in the website sales conversion process. If you’ve not yet upgraded to Universal, or have an ecommerce site but haven’t added Enhanced Ecommerce, let us know – we can help.