Google has added further spark to the debate on digital ad viewability, announcing the upcoming roll out of viewability reporting for video ad campaigns.

Google’s video viewability reporting will be available later this year and will be based on standards agreed by the US Media Rating Council and the Interactive Advertising Bureau (IAB). By this measure, a viewable video ad is one where at least half the video is on screen for at least two seconds. Google will also report how much of the video ad actually plays, and allow advertisers to buy only viewable video impressions.

Making the announcement at last week’s Las Vegas Consumer Electronics Show (CES), Neal Mohan (VP of video and digital advertising), said that viewability is not an end in itself. ”With the confidence that their ads can be seen by a real person,” Mohan said, “marketers can then go on to strive for – and measure – what really matters: impact and engagement.” To this end, Google is also planning to make more measurements available later in the year, including the total amount of time an ad is viewable and the audibility of video ads.

Viewability reporting will initially be available only to DoubleClick users and select YouTube advertisers, and limited to reserved inventory on YouTube. Later Google plans to offer the ability to buy only viewable video impressions across the Google Display Network (including YouTube), as it already does for advertisers running banner ad campaigns.

Google’s December findings that 56% of ad impressions on the Google Display Network were not viewable may have caught some by surprise. But the announcement was a calculated one.

For one thing, Google allows brand advertisers who choose to pay on impression to pay for viewable ad impressions only. What’s more, as The Washington Post’s Jeff Burkett pointed out in a recent opinion piece, Google’s Active-View technology is one of only two solutions that publishers think capable of measuring up to 100 percent of viewable impressions. Most others fail to measure 10-30 percent of ad impressions but, just because impressions cannot be measured, it does not necessarily follow that they were not viewable.

All that said, Google hopes to put to rest the fears of brand advertisers, and wrest more budget from TV, and should be applauded for these initiatives. As online marketers we want greater visibility and control over campaigns; video as well as display.

Announcing findings for what CEO Christian Bartens described as the largest attribution study of its kind, Australian data analytics consultancy Datalicious claims that revenue generated by Facebook and display advertising is considerably underestimated. Conversely, search revenue was found to be overrated in the consultancy’s report, Media attribution: Optimising digital marketing spend in Financial Services, due to be released today.

Datalicious used a multi-touch attribution model rather than the last click attribution that is the default for Google Analytics and other web analytics programs. The consultancy said it applied logistic regression, with custom conversion credits assigned to every campaign touchpoint along the purchase path depending on its relative importance in driving conversions.

Facebook funded the study, but says it did not have a say over the results, nor how the data was collected or used.

Datalicious found that Facebook advertising should be credited for 911 percent more revenue and, despite a high average ROAS, Facebook spend accounts for only a small share of online advertising budget.

In contrast, using multi-touch attribution, the revenue credited to organic and paid search was consistent with that reported under last click attribution, or decreased slightly.

Exposure to ads – even though no clicks resulted – was also determined to be undervalued. The report found that the more ad impressions consumers had been exposed to, the more likely they were to convert.

According to the report, display ads lead to nine times more search responses than clicks alone. But Datalicious admits the impossibility of proving with certainty that searches result from display advertising. “While comparing thousands of converting and non-converting purchase paths across millions of campaign touch-points, we have found some very strong circumstantial evidence that that is indeed the case,” the report states.

Last click attribution isn’t perfect – it’s just a whole lot easier to measure. The impact of other channels in generating signups and sales should always be considered, however, across all devices. Budget should then be shifted to where your potential customers are and where you are getting best results. However, if these consumers also engage through search, then you need to make sure you have a strong search presence too.

We don’t disagree with the findings (it doesn’t take a lot of number crunching to see that in most verticals last click does favour search over display and social advertising).

We’ve seen some highly effective Facebook ad campaigns, but their returns (on a last-click basis) are usually just a fraction of the results from paid and organic search. And of course 911 percent of a comparatively small number is not necessarily a big number.

3.Watch this Space: Facebook is morphing into a video platform

Facebook has announced that Facebook users are posting 75% more videos to Facebook than they did a year ago, while the number of videos showing up in their news feeds has more than tripled.

Growth has been particularly strong in the US, where users are posting 94% more videos to the social network platform. And over half those who visit Facebook daily watch at least one video every day.

The shift is being driven by mobile. Not only do nearly two-thirds of video views come from mobile, but the prevalence of smartphones means that videos can be easily recorded and uploaded.

Since June last year, Facebook globally has been averaging more than a billion video views every day. According to eMarketer’s latest report, while Google sites such as YouTube still lead with 162.3 unique viewers, Facebook runs second with 93.8 million unique viewers. Indicative of Facebook’s rapid growth, in November for the first time there were more videos uploaded directly to Facebook than to YouTube.

Brand marketers have been talking about The Song, an Apple TV advertisement that was simultaneous published on YouTube and Facebook in mid-December. It’s been popular on YouTube with over 3.2 million views, but wildly popular on Facebook with nearly 21 million views at this writing.

Interestingly, over three quarters of Facebook users say they discover the videos they watch on Facebook, not on YouTube. That’s in the US, not here, where it’s likely that percentage is lower. However, Facebook is all about sharing content and commenting on it, so if you have good video content you want to be noticed think about promoting it on Facebook.

Last year videos in Facebook news feeds were set to play automatically when the user scrolled, making them difficult to ignore. That’s helped increase view rates for Facebook video ads and lowered cost per view figures – though, of course, even though the videos were playing they weren’t necessarily being watched.

On auto-play videos are silent until users tap or click on them, so if you are posting videos to Facebook, make sure they grab viewers’ attention right from the start — even when they’re silent.

Reuters and other news sources are reporting that Google is about to enter the US car insurance market. They cite a recent blog post by Forrester Research analyst Ellen Carney which provides compelling evidence, with speculation Google is in negotiations to acquire auto insurance comparison site CoverHound. Carney thinks it likely a California pilot will launch this quarter, ending a two years plus delay in bringing to the US market a service the company already offers in the UK.

Carney’s research revealed that a company called Google Compare Auto Insurance Services Inc. is already licensed to do business in more than half the states in the US, and licensed to sell on behalf of several major insurers. In her blog post, Carney notes that a corporate treasurer at Google without apparent insurance industry experience is licensed to sell insurance on behalf of San Francisco-based CoverHound. 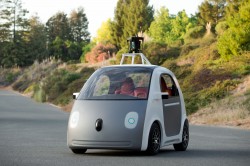 Driverless cars may not be the only auto-related product that Google sells. Car insurance is next.

Google acquired UK price comparison service BeatThatQuote.com in 2011, and the following year started providing a UK service that lets users compare more than 125 auto insurance options. The company is paid a commission when users sign up for a policy online or by phone. Google also allows UK users to compare travel insurance and mortgage quotes, as well as credit card offers.

Google already offers hotel and flight reservations in the US and Amazon is reportedly launching a similar service this month.

We expect to see more of these services being provided, and in other markets.

The additional revenue is likely a bonus, but not the primary reason for Google’s offering these services. With mobile usage on the up and up, Google needs to provide a one-click solution for users who might otherwise go directly to Amazon, Expedia or, for that matter, Esurance.

That said, it’s likely to be some time before we’ll see a similar service from Google in this market.