The latest NZ online advertising spend figures have been released and – no surprises – the massive growth seen in previous quarters continues unabated. In fact Q3 was a record, with a total online spend of $159m – a 38% year-on-year increase. Search and Directories continues to dominate, accounting for 54% of all online spend and increasing by a staggering 66%. Also impressive was Mobile, which grew by 225% (albeit from a much smaller base). 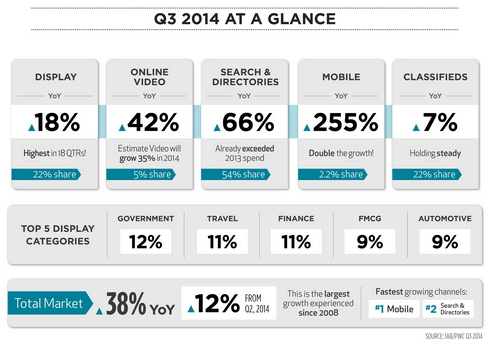 Whilst NZ growth is impressive, we’re simply reflecting the massive growth in online advertising that’s happening worldwide. Mobile advertising is the key driver of growth around the world, and according to eMarketer advertisers will spend over US $64 billion worldwide on mobile in 2015 – an increase of nearly 60% over 2014. In the UK, digital ad spend overtook TV a couple of years ago and next year more than half of all ad spend will be spent on digital media, making it the first country in the world where the majority of ad spend goes on digital.

As we’ve said previously, smart NZ advertisers should take note of what’s happening in more developed markets, recognising that’s what the future holds for NZ, and plan accordingly. Businesses that live in yesterday’s world will get left behind.

2.Bot Fraud – Advertisers will waste over $9.3bn next year

Advertisers could lose as much as USD $6.3 billion to bot fraud next year – that’s the shocking finding from a new study commissioned by the US-based Association of National Advertisers (ANA).

The study found that the majority of bot traffic (67%) came from home computers that had been hacked.

“After infiltrating home computers with malware,” the White Ops/ANA report states, “cybercriminals make real money from their victims by installing ad bots.” The report also says that because the bots are using the computers of real people, and are sophisticated enough to move cursors over ads and put items in shopping carts, they invite targeting by remarketing ad campaigns.

While we don’t share her taste for sugary confectionary, we tend to agree with Amaya Garbayo – she’s the associate director of insights and planning at Kellogg (one of the advertisers involved in the study). Earlier this year, Garbayo said that any level of fraud is unacceptable in digital advertising. “If we are paying…for an impression it should be an impression,” she said. “Imagine you buy a dozen doughnuts, and you open the box and there’s one doughnut. I want to understand what I am getting for the money.”

The White Ops/ANA report puts more heat on an industry that needs to be more active and vigilant in reducing bot traffic.

Meanwhile, what can advertisers do to reduce the likelihood of fraudulent impressions? If you’re optimising your campaigns to hard metrics (bots don’t buy things – only people do), you’ll be weeding out sites with high bot traffic anyway, but the study (which can be downloaded here) has a number of other recommendations. These include using day-parting so that ads run only during waking hours (as bot fraud peaks between midnight and 7am), and targeting ads to newer version browsers (more bots than humans are using early versions of Internet Explorer). The Interactive Advertising Bureau (IAB) has also published an informative paper on how publishers, buyers and networks can reduce risk, but if you want the full details you should watch AOL’s recent 30-minute TEG Talks video on ad fraud.

It seems that in many organisations there’s not a whole lot of communication happening between the teams responsible for TV advertising and those looking after website content.

A recent survey revealed only 20% of US television advertisers clearly showcase on their websites the products they promote on TV. Things are even worse with mobile – 55% of US marketers don’t display products showcased on TV on their mobile homepages at all. Advertisers in the UK and Germany, the other two markets examined in the report, are doing slightly better, with 22% and 25% (respectively) clearly showcasing products online.

Advertisers who don’t connect their TV advertising and websites are bound to be losing sales.

Another recent survey revealed the strong influence TV has on search activity. The survey asked adult smartphone users in UK which traditional media prompted searches on their smartphones. As the chart below clearly shows television was cited more than any other media.

We know from work we’ve done for various clients that the situation is very much the same in here in New Zealand. TV advertising has a huge impact on online search behaviour.

Are you running ads on TV? If you are then you should ensure that:

If you’re not doing the above, you’re going to be wasting a whole lot of money, frustrating prospective customers, and sending sales to your competitors.

We nearly missed it, but a Financial Times report last month may have businesses here in New Zealand rethinking their policies on social media use in office hours. The Financial Times story revealed that Facebook is secretly working on a new version called Facebook at Work.

Facebook at Work would keep users’ social personas separate from their professional ones, allowing them “to chat with colleagues, connect with professional contacts and collaborate over documents”, according to the Financial Times report. Look and feel will be the same as the Facebook we all know and sometimes love.

Now in testing with a select group of companies, the new Facebook is unlikely to be publicly released before Q2 2015. However, Facebook at Work is expected to be provided free, at least initially. While it would obviously compete with LinkedIn, its emphasis on workgroup collaboration would have Facebook at Work competing against products from a large number of companies including Google, Microsoft and IBM.

Facebook will have a difficult job winning over companies already wary of lost productivity due to employees’ internet usage. Nor does the company have a solid gold reputation for privacy and data security, and this is also likely to be of concern.

For what it’s worth, our opinion is that Facebook would be better to create a completely new platform for business use, leveraging the technology it has already created and recently acquired. Doing so would also help alleviate employee concerns that Facebook posts and images from their personal lives might pop up in a work environment.

Free is an attractive price point, however. And, if only for that reason, if your company is already investing heavily in workgroup collaboration software, you may want to assess the features and benefits in using Facebook at Work.