Just how good is your Facebook ad? If you’re not sure, look for Facebook’s new Ad Relevance metric in your ad reporting dashboard.

Facebook rolled out Ad Relevance scores last week. Like Google’s AdWords Quality Score, the new scoring system will impact the per click and per impression costs advertisers need to pay and how frequently their ads are shown.

Facebook Ad Relevance is scored on a scale of one to 10, with 10 being best. Scores are dynamic, based on user interaction with ads and each ad’s objective. Video views, likes and click-throughs will help improve Ad Relevance score. But when Facebook users hide or report ads, Ad Relevance scores will be reduced.

Why should you care?
To improve user experience and ad revenue, Facebook wants its users to see the most relevant ads. As marketers we also want our ads to reach a relevant audience.

Facebook is rewarding advertisers who get their targeting and messaging right, and helping by providing the feedback needed to make improvements. Get it right, and we’ll pay a lower price for our ads to be shown, and they’ll be shown more frequently. Get it wrong, and we’ll pay more for ad impressions and clicks.

Consider testing ad combinations with small audiences first to improve Ad Relevancy scores before launching a full campaign, and make sure to monitor results throughout the campaign’s duration.

Bids will still matter, of course. And Facebook advises that relevance scores should not be used as the primary indicator of an ad’s performance. Depending on your goals, conversions, cost per conversion, and the like should remain your most important success metrics.

An interesting revelation by Google last week – apparently 1 in 20 searches is for health-related information.

Frankly we were surprised it’s so high. However according to several doctors we know it seems a huge number of patients in NZ self-diagnose first with “Doctor Google” before getting a second opinion from their GP. Apparently this can be quite frustrating for doctors because, as the saying goes, a little knowledge is a dangerous thing. More often than not these self diagnoses are well wide of the mark and minor ailments are not the terminal disease read about online.

A big part of the problem is that much of the medical information found online is of dubious quality.

In response, Google is going to be providing directly to searchers via the Google Knowledge Graph in depth medically verified information about more than 400 health and medical conditions. This will show users typical symptoms, treatments and details on how common a condition is, like the example below. 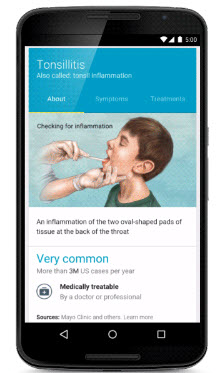 Why should you care?
As consumers this is probably good news – we’ll have easy access to credible health information from a trustworthy source.

The issue however is that increasingly Google is becoming less of a springboard that directs searchers away to external websites, and instead is keeping that traffic on Google by answering questions directly.

Google is becoming an answer engine, rather than just a search engine.

As such, Google is effectively competing with websites, many of whom are advertising clients. There are plenty of examples now of where Google can answer a question directly without you needing to go off to another website.

All these are highly useful for consumers, but are bad news for websites that have invested a great deal in developing content or tools to attract visitors.

Social media platform Pinterest is to add e-commerce “Buy” button functionality to pins in the next three to six months, according to tech news site Re/code. The new functionality will allow Pinterest users to complete a product purchase on the Pinterest site or within the Pinterest app, although orders would be processed and fulfilled by the sellers themselves.

At the same time, Pinterest has warned its users not to add affiliate network links to their pins, and is removing links to affiliate networks where these already exist. Though a Pinterest spokesperson described the move as one intended to improve user experience, the timing appears curious.

Why should you care?
Companies with an official Pinterest page will soon be able to sell their products to Pinterest’s 5.3 million users. However, it remains to be seen what remuneration Pinterest will exact for sales on its platform and what the requirements will be for participation.

Pinterest will want to avoid any negative feedback from its users and, for that reason, will likely have exacting order fulfilment and delivery standards for approved companies.

Twitter has announced its acquisition of Niche, a small New York startup operating since 2013, for an undisclosed sum rumoured to be between USD $30 million to $50 million. Though describing itself a technology platform, Niche is essentially a talent agency, a middleman between social media creators with large fan bases and the brands willing to pay them to create sponsored content. Niche also provides free cross-platform analytics tracking software.

In a blog post announcing the deal, Niche says it has over 6,000 community members and relationships with 100 brands and agencies. Since last week’s announcement of the acquisition, however, Niche’s roster of creators is now approaching 8,000. 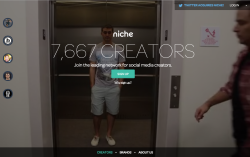 Why should you care?
Niche’s relationship with Twitter and Twitter-owned Vine is one of relatively long-standing, and the acquisition is not a surprising one. That said, the purchase gives Twitter a new revenue stream and a closer relationship with social media creators, while providing advertisers more options when advertising on Twitter.

In our view Google Webmaster Tools (GWT) are essential for monitoring the health & performance of websites. If you don’t already have a GWT account for your website, you really should set one up. It’s easy to do and free.  https://www.google.com/webmasters/tools/

For reasons unknown (at least outside Google), GWT data has not been updated by Google for over a week now (usually there’s only 1 or 2 day lag). At the time of writing the latest data we can see in all our clients GWT accounts is Sun 8 Feb. There are lots of people complaining in the Google Webmaster forums, but at this stage no response from Google on when it will be resolved.

Why should you care?
GWT provides a great deal of useful information specifically about your website directly from Google. Much of this information is not obtainable from other sources.  Google will also uses GWT to alert you to critical issues, such as problems crawling pages on your site which, if not addressed, can lead to drops in rankings and traffic.

Of course this data is only useful if you know about it.

The fact GWT has not updated data for a full week means there could be issues Google’s having with your site that you don’t yet know about, which is why so many people are getting upset about GWT not updating. We assume there is some technical glitch Google is dealing with and that normal services will resume shortly. Our advice is keep checking.