If you’ve used the Search Query reports in Google Webmaster Tools or viewed them in Google Analytics, you’ll know that they’re far from perfect. Only data for the last 90 days is reported. Not every keyword is reported. And impression and clicks data is obviously still being rounded.

Currently, Search Query reports show how many queries your site had over the past 90 days and what those queries were (but only up to 1,000 search terms per day). You can also see the clicks you received, your clickthrough rate, and your site’s position on the search results page. Data can be filtered by query, location, and type of search (web, image, mobile, video or news).

What else is missing? You can’t match the search term to the landing page except by clicking on each query or landing page individually. And you can’t know how well a particular term performed in terms of conversions and engagement.

In a week in which we have been wondering what we we’ll do when there is no Internet, and if the neighbour’s maple tree has an email address, this may not appear to be big news. But we’re all optimists here, hoping that Google will be more generous in sharing the data at its disposal.

Google first mandated secure search protocol for all search queries in 2011. Since then, we’ve gone from increasingly to totally reliant on the Webmaster Tools Search Query report for organic search keyword traffic data. But its limitations have been a frustration.

Like many others, we’re hopeful that some of the Search Query reports shortcomings will be corrected, improving analysis and understanding of organic search performance. And we’re intrigued by the promise of some additional “fun stuff” – whatever that turns out to be.

If you’re keen to participate in testing the new reports, you can register here.

2. No more uh-ohs: Google Analytics lets you recycle your trash

Hands up if you’ve ever mistakenly deleted a view or property from your Google Analytics account.

No? Me neither, but enough people evidently have for Google to be adding a trash can to the application.

Delete a view, property or account, and it’s held in the Trash Can for 35 days before final deletion. Realise you’ve made a mistake (or someone else has) and you can restore what’s been deleted. That is, of course, unless you’ve left it too late.

If you’ve got multiple people accessing your Google Analytics account(s), some with little analytics experience, it’s possible that mistakes will happen. Now there’s a way to quickly recover when things go wrong. But while the functionality is already in place for all accounts, the Trash Can option has yet to show up for the accounts we checked.

Show your new users the Trash Can feature when first introducing them to Google Analytics. Knowing there is a safety net should they do something wrong will likely put them more at ease.

Men use LinkedIn, YouTube, Google+ and Reddit more than women, but when it comes to Pinterest it has long been more popular with females. According to December figures from online audience metrics company comScore, about 71 of Pinterest’s 72.5 million active users are women.

To redress this imbalance, Pinterest is now providing gender-based content recommendations to new members, along with different search results based on gender.

Search for “watches”, “shoes”, “hair”, “health”, “workout”, “fashion” or “tattoos”, for instance, and the results will be markedly different for men than women, based on what other men or women pin to those categories. Previously, results would have come from pins posted by both genders but this change, according to Pinterest, has increased engagement on the platform. 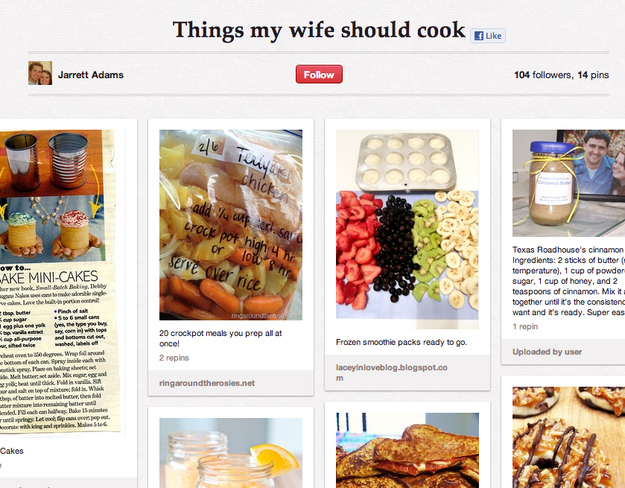 However, it seems that male users have increased substantially over the last year and many more of them are prepared to do their own cooking (particularly if a flame grill is involved).

Pinterest now says the top interests followed by men are as follows:

Last month Pinterest launched its CPM-based Promoted Pins ad product in the US market, enabling advertisers to target Pinterest members based on their gender, location, keyword searches and categories they have visited. The company is also considering plans to match Facebook’s targeting capability in allowing advertisers to upload their customer database and target Pinterest users with matching email addresses.

While Pinterest’s membership is but a fraction of Facebook’s, members are actively pinning items of interest, often the things they are interested in purchasing. Promoted Pins, once it rolls out to other markets, offers advertisers a way to connect with a highly engaged audience, though Pinterest’s ability to generate sales and leads is still largely unproven.

Two factors seem critical to Baidu’s success. First, according to Ng, Baidu’s deep learning algorithms are trained on a recurrent neural network, making the system much simpler than other phoneme-based speech recognition systems. Second, is the use of next generation GPUs (graphics processing units) from chipmakers like Nvidia — hooked up in parallel they are much faster and cheaper to train speech recognition models.

Ng thinks speech recognition will become even more critical as less literate people use the Internet and prefer to speak instead of write queries. “We’re entering the era of Speech 2.0,” Ng says. “And this is just the beginning.”

According to Carnegie Mellon University assistant research professor of engineering Ian Lane, “This recent work by Baidu Research has the potential to disrupt how speech recognition will be performed in the future.”

This news is interesting for a couple of reasons: first, Baidu’s plans to expand beyond China; second, the likely impact of improved voice recognition on search.

Forbes’ Robert Hof reports Baidu plans to offer search internationally by developing world-class speech recognition, translation and other features. This is good news — with Google accounting for as much as 93 per cent of online and mobile web organic search traffic worldwide, we can clearly do with better alternatives than Yahoo and Bing.

Today only 15 per cent of Apple iPhone users actually use Siri, Apple’s personal assistant and knowledge navigator. But mobile usage is fast becoming ubiquitous and, as speech recognition systems improve, we expect voice rather than text-driven navigation to become the norm.

As of last month, Google Translate and Microsoft’s Skype Translator now translate spoken conversations in real-time (Translate works with 80 languages, including Klingon; Translator is limited to Spanish-English). And we think improvements in machine learning — the ability to recognise speech even in noisy everyday environments and understand context — will also boost adoption of real-time language translation.

And the implications for search? We expect a range of interesting new challenges in coming years for websites that want to rank well in voice-driven search results.