In a move widely seen as challenging Google in one of its most profitable verticals, Amazon is reported to be launching its own travel service in January.

Travel news and information website Skift reports the service will initially be limited to a selection of independent hotels and resorts (all with four stars or more on Trip Advisor). Participants will be from areas in and surrounding San Francisco, LA, Seattle and New York.

According to the report, participating hotels and resorts will pay Amazon a 15% commission rate, the industry standard. Rooms are expected to be priced at standard rates, but hotels will be free to discount.

Amazon Travel will also include destination information, along with travel accessories and other retail items appropriate to an upcoming trip.

Let’s be clear: while a January 1 launch date is rumoured, Amazon has yet to launch Amazon Travel and no announcement has been made as to when the service might expand into international markets. But consumers may eventually have a one-stop shop for travel planning and booking, replete with helpful consumer reviews and competitive pricing.

If you’re not in the travel industry, take notice. Amazon already offers a local grocery delivery service (AmazonFresh), designer brand fashion, and cloud computing services. If Amazon Travel is a success, other services should soon follow for other verticals, with eventual roll out to international markets.

The news is not so good for Google.

Just two months ago Google’s Eric Schmidt named Amazon as Google’s biggest competitor in search, as many shoppers start their product search on Amazon not Google. Google won’t be welcoming this news, which is squarely aimed at one of the company’s most profitable markets.

Google has been providing international flight and hotel details in its search since March last year, following its acquisition of ITA Software in 2011. Consumers can’t yet book flights or hotels directly through Google search results, but we expect there to be closed door discussions at Mountain View on adding this functionality.

Just last week, The Wall Street Journal reported that Google has approached Google Shopping retailers about adding a “Buy Now” button on their listings. Similar to Amazon’s 1-click ordering feature, Google Shopping consumers would no longer need to leave the platform to purchase from merchants’ sites. Reception has apparently been “cool”, with retailers wary of ceding too much control to Google.

Historically the metrics online marketers have primarily used to track digital campaign success are impressions & clicks. However these have started to lose credibility, particularly in light of the bot click fraud we reported last week and recently released Google research indicating nearly 60 percent of online ad impressions are never seen.

Given this – and the compelling fact that still less than 10% of retail transactions in the US occur online – there is increasing awareness that offline sales and store visits are the metrics which really matter.

Consequently Google, Facebook and other online companies have been under pressure to show advertisers how their online ads impact in-store behaviour. Easier said than done – finding ways to tie offline conversions back to online marketing is a big challenge. However the rise of smartphones is now starting to make this possible & late last week Google announced the release of the “Store Visits” metric In AdWords.

Google is capturing location data from iPhone and Android users that have location services or location history turned on. From this they can see when users go into stores based on store locations. There’s reportedly a 30 day window from the ad exposure that will be used to determine whether there’s been a store visit. It’s important to recognise that store visit metrics are an estimate. Due to privacy concerns Google is using anonymized, aggregated user data and extrapolating it. Also, estimates are store visits – not purchases.

This is initially rolling out just to eligible retail advertisers in the US over the next couple of weeks. Subject to how it goes, there’s expectation the program could grow beyond retail to other chains such as hotels, restaurants, movie theaters and car dealerships.

Whilst this is still very much early days it’s a clear indicator that future ad metrics will be much more tangible and tied to calls, store visits and ultimately offline sales. Whilst widespread tracking of store visits and offline sales is some way off, tracking phone calls triggered from online marketing is something that can be measured today.

If phonecalls are important to your business and you don’t know how many can be attributed to your online marketing activities talk to us.

Just in time for Christmas, Facebook has announced new functionality for Business pages that may help redress recent declines in the social media behemoth’s organic reach.

Call-to-action buttons that can “link to any destination on or off Facebook that aligns with a business’s goals” will soon be available at the top of a Business page, at left of the Like button. Seven call-to-action options will be available – Book Now, Contact Us, Use App, Play Game, Shop Now, Sign Up and Watch Video.

The new feature will roll out in the US over the next few weeks and internationally in early 2015.

As for the ubiquitous “Like” button, that too could change, Facebook CEO Mark Zuckerberg contemplating adding another button for use on occasions when a “Like” is inappropriate. Zuckerberg has, however, ruled out adding a “Dislike” button.

In related news, Facebook’s Christmas cheer did not extend to long-time search partner Bing. Facebook has replaced Microsoft’s search engine with its own proprietary search engine, powered by its Social Graph technology and providing results from Facebook posts rather than the Web.

Businesses that have relied on Facebook to engage with customers and potential customers haven’t had much to cheer about lately. They’re now largely reliant on paying for promoted posts and other Facebook advertising in order to reach their audience.

These companies – particularly bigger brands – are now questioning the wisdom in relying on third party platforms like Facebook to engage their customers.

The addition of call-to-action buttons will be welcomed. But if any of them were expecting Facebook to give them a sports car for Christmas they won’t appreciate gettiing a cartoon tie and a pair of socks.

Google’s Lightbox ad units are now available to all AdWords advertisers. The rich media interactive ads, introduced in September, are built in HTML5 using responsive design and can now run on all devices. When you place your cursor over a Lightbox ad (or tap on it if you are using a mobile device), it automatically expands to full screen size.

Ads can use advertisers’ YouTube or Google Maps assets, or uploaded images, and advertisers only pay when the ads are expanded.

The Kate Spade Lightbox ad shown here, when expanded, allows consumers to click on the images, video, and location. 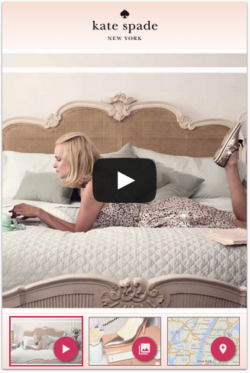 Since advertisers won’t be charged if people don’t expand and engage with the Lightbox ads, this new ad format should interest brands looking for better ways to target relevant and interested audiences. Google has said that the ability to pull content from other Google products like Google+ pages is coming soon, but we think Google Maps integration a no-brainer for many companies.

We expect you’ll be taking a break to be with family and friends over the holidays – we will be too. This is our last First Thing Monday for this year, but we’ll be back in the New Year with more news on what is happening in the world of online marketing and analytics.

For a nostalgic look back at 2014, take a look at Google’s glossy tribute to everything we searched for this year.