The latest news about web marketing, SEO, PPC & Analytics. But only the stuff that matters from a New Zealand perspective. Less noise, more signal!

As a switched on marketer you’ll know how important your website is to the success of your business. Being aware of what’s happening in the fast moving world of SEO, PPC Advertising & Web Analytics is essential. But things change so fast and staying abreast of this can be overwhelming. Most people simply don’t have the time to do so, despite knowing how important it can be to their business.

At SureFire we want to help you by sifting through all the noise and highlighting what’s new and noteworthy in SEO, PPC and Web Analytics. But more importantly, answer the question – Why this might matter to YOU and YOUR business here in New Zealand.

Google has released new Penguin and Panda updates recently, updating Penguin for the first time in over a year. Penguin, you’ll remember, is designed to weed out spammy sites – in particular, those violating Google linking policies – from Google search results.

Interestingly, after its release on October 17th, Penguin 3.0 was described by Google as a “refresh” to its algorithm. That means that in fact there were was nothing new added to the Penguin algorithm: rather, it was simply re-run so that sites that had fixed their Penguin issues would no longer be penalised, and others that had not been detected previously would be.

We’ve come to expect that where there’s a Penguin, there’s often a Panda. Panda, you’ll recall, is designed to filter out sites with poor content – meaning thin, duplicate or machine-generated content. Panda 4.1 was released at end of September and we’re only mentioning it now because we’d not normally think another Panda update worthy of coverage. But here’s the thing: Google made the point of announcing Panda 4.1, having previously said they weren’t going to announce any more Panda releases. According to Google Webmaster Trends Analyst Pierre Far that’s because Google had “been able to discover a few more signals to help Panda identify low-quality content more precisely”.

It has taken Google over a year (Penguin 2.1 was released October 4, 2013) to refresh the Penguin algorithm. If your site was amongst those hit for spammy links a year ago and you set about removing and improving your site’s link profile, that’s a long time to wait for redemption.

Google has now said that new Penguin refreshes will happen more frequently. But we’d emphasise the fact that you don’t want to take risks – or allow an SEO firm to put at risk the reputation of your website and company – in trying to game Google search results.

Whether you’re caught out by Penguin or Panda, the gains are often short-lived; the impact, when you’re found out, often long-lasting.

If you’re not sure whether your site meets Google’s quality guidelines, you may want to read Google’s Search Engine Optimization Starter Guide which offers tips.  And if you’re really keen, someone’s published an internal document Google issues to their team of quality raters who manually review websites for Google. The  Quality Ratings Guideline  is 160 pages, so a lot to digest.

We’re surprised it’s taken this long: Google is testing new ad formats for movies and music, adding a link that will point at “legitimate sources” where a user can download music and movies.

Google relies on copyright holders to submit a Digital Millennium Copyright Act (DMCA) infringement notice before removing web pages from its indices. Last year, Google received over 224 million removal notices for web pages due to copyright infringement, and the problem isn’t going away.

The new format will show a list of ads in a card at the top of the search results as shown here:

Ads will also show up when searching for major brands or artists, as shown here for Lorde:

Google is trying to improve its efforts to fight piracy through such initiatives as Content ID (YouTube’s content identification tool) and has recently updated its policy document “How Google Fights Piracy“.

Unless you are in the business of selling or streaming movies or music online then this update will have little effect on your business. But if you are, Google is likely to favour some providers over others, and you may need to adapt your strategy if your business is to receive due recognition in search results.

In the US, the IAB has just released its first half 2014 digital advertising revenue figures, with revenues up 15% compared with results of a year ago.

While it’s important to note that the report is for the US market only, a couple of things caught our eye:

We’ve been at pains to report the increasing usage of mobile devices in using apps and browsing the Internet, with rapid growth occurring in this market as well as overseas. Naturally enough, advertising budget is going where the eyeballs are, and we expect to see the same sort of acceleration locally over the next few years. On mobile devices, more money is going to in-app display formats, while Facebook’s advertising innovations are likely a large factor in the growth of social ad spend.

If you’re not already taking advantage of mobile and social advertising, or not getting the results you expect from your campaigns, get in touch – we’d be happy to help.

From the makers of Gmail comes something new. It’s called Inbox and, while we’ve yet to try it, it’s supposedly not your average email application.

Inbox is designed to address the fact that most of us get more email than we can handle. With that comes the possibility of missing important pieces of information (especially when people use email on their phones). 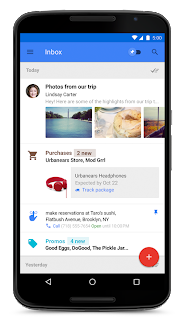 Inbox is invite only at this stage but if you are keen to try it out email inbox@google.com – we’re told you will get an invite as soon as more become available.

We can all use help in managing email, and some key features look appealing:

Facebook has a secret…. it is covertly trying to make you a nicer person. That’s what Chris Gayomali reports in a recent Fast Company article that has caught our attention.

Facebook director of engineering Arturo Bejar is the man charged with the responsibility of countering what psychologists call the “online disinhibition effect”.

People tend to be much meaner when they are sitting behind a keyboard than in real life, according to psychologist John Suler who coined the term. That’s because they lack the visual cues that, when dealing face-to-face, prevent them from saying something inappropriate.

Bejar and his team are trying to answer the question as to whether people would act differently online if they new they were hurting someone, and then provide feedback that helps modify their behaviour. One way is by allowing some users to notify their friends anonymously when they’ve crossed the line.

We commend attempts to improve online communication and make Facebook a safer and happier place.

After all, trolls and cyberbullies are everywhere, even on Facebook. And when they lack the emotional maturity to deal with online disagreements and bullying, teens are in particular danger. Exposure to mean comments or provocative remarks can cause them huge emotional distress.