Google’s on-off relationship with Twitter is back on again, with news this past week that live tweets will appear in Google search results as soon as they are posted.

While neither company has publicly confirmed the new deal at this writing, Bloomberg reports reinstatement of a 2009 agreement between the two companies providing Google with direct access to Twitter’s live feed. This will mean that tweets appear in Google results automatically, as soon as they are posted.

Twitter already provides Yahoo and Bing with access to its “firehose”, the live stream of tweets by Twitter’s 284 million users.

Citing an unnamed source, Bloomberg reports that the new deal doesn’t include sharing advertising revenue. However, suggestion is that Google will pay Twitter a data licensing fee, raising questions given Google’s policy that it will not pay for content.

Since Twitter ended the original agreement in 2011, Google has instead manually crawled Twitter’s site for tweets. Direct access to the Twitter feed should see dramatic improvement in indexation, especially important when topics are trending in both search and social.

Twitter was once the cornerstone of Google realtime search, which at that time also included updates from Facebook, FriendFeed, Jaiku, MySpace and other sources. Then VP of Search Products and User Experience, Marissa Mayer (now Yahoo CEO) wrote in a blog post at the time that realtime tweets were “an interesting source of data about what is happening right now in regard to a particular topic”.

While elements such as Quora and Google News links still remain, Google has long planned to relaunch realtime search with data from various sources.

Last year’s study by Stone Temple Consulting revealed that Google currently indexes relatively few tweets, favouring those by influencers (who, however, get only half their tweets indexed). Worse, however, even accounts with more than 5 million followers get only six percent of their tweets indexed within 24 hours, and only 15 percent within 48 hours.

It’s a mutually beneficial arrangement for both Google and Twitter, according to Robert W Baird & Co analyst Colin Sebastian. In a note to investors, he wrote that this allows Twitter to “surface more…content to non-registered users” and drive more traffic to its website and application. It also lets Google “fill the information gap existing between live events and indexing of related digital content.”

When will we see evidence of the new deal in Google search results? Pending public announcement, speculation is that it will be in the first half of this year, and probably in the next three months.

2. Apple planning to take on Google with its own search engine?

Steve Jobs famously got upset when Google followed Apple into the smartphone market. Now it looks like Apple may finally be ready to turn the tables on Google by entering the search engine business.

Last week the search industry was abuzz with speculation when Apple advertised they are looking to hire an engineering project manager for “Apple Search” which it described as a “search platform supporting hundreds of millions of users that will revolutionise how people use their computers and mobile devices.”

The debate is whether this signals that Apple is intending to go head to head with Google in search or simply planning to augment the existing Spotlight Search found on Apple devices. The fact that Apple’s long-running search agreement with Google for its Safari browser expires this year suggests that if Apple was ever going to enter the search market, now would be time.

As noted, the idea of Apple competing with Google in the search engine space is purely speculative at this point. Consumers usually benefit when there’s strong competition & it’s evident (at least from some straw polls we’ve done) that many people would welcome seeing a strong competitor challenge Google’s overwhelming dominance of the search market.

Whether or not that competitor will be Apple is something we’ll have to wait & see – however if Apple do get into search, let’s hope they do a better job than they’ve done with maps where, in NZ at least, Google wipe the floor with them. 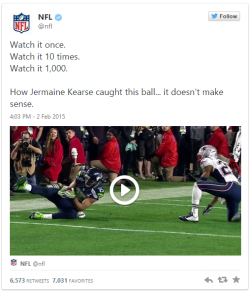 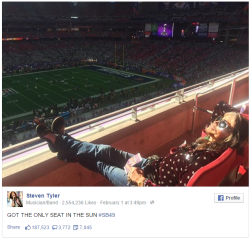 Stop and think a moment about those numbers. That’s an audience that’s more than the population of the UK, and almost three times that of Australia.

Yes, this was the most social of Super Bowls to date. At game end, activity peaked with 1.36 million people per minute engaged in Facebook posts about the game. And Katy Perry’s halftime finale engaged 1.02 million people a minute.

Canada, Mexico, Australia and Ireland were the most active countries outside the US, and women (particularly those between the ages of 25–34) were the most represented in Super Bowl conversation.

And Twitter? The microblogging platform initially reported 28,4 million tweets related to Super Bowl XLIX. That was later revised to 36 million tweets which generated 2.5 billion impressions, making this the most tweeted Super Bowl. Top moments on Twitter were the final interception by the Patriots that secured the victory (395,000 tweets perminute), the end of the game, and the half-time show (three million tweets).

But Facebook and Twitter weren’t the only social platforms to benefit from the big game, however. YouTube has totalled nearly 4 million hours in watching this year’s Super Bowl commercials and teaser videos. And, following the halftime performance by Katy Perry with Missy Elliott and Lenny Kravitz, streaming music service Spotify reported a huge surge in demand for their songs.

Of course, if you’d paid for a Super Bowl ad, you’d be foolish in the extreme not to have had a social media campaign to support it. But whether it’s during the Super Bowl, an All Blacks game or any popular event, there’s always a conversation going on, and as marketers we can choose how and when to interact. And for important times or events, we need to know when to get involved, when it’s appropriate and relevant, and how best to make our brands a part of trending conversations.

Currently ad viewability is a contentious topic with robust debate going on in the US between advertisers, publishers and ad industry bodies like the IAB.

Late last year advertiser confidence was seriously undermined when a shocking report from Google revealed that 50% of display ads were not viewable.

Given most online display ads are paid for on a CPM or impression basis, advertisers quite reasonably expect they are paying for ad impressions people actually SEE. Not ads buried way below the fold that never get viewed or ads rendering only after a person has scrolled past them. Unviewable ads are a waste of advertisers’ money.

In response the online ad world is rushing to make viewable ads – ads people can actually see – the standard. Technically measuring ad viewability is proving a major challenge for publishers. A big part of the problem is mobile, and the wide variety of screen sizes. Not all sites are designed well for the multitude of screen sizes–yet mobile traffic, and ad volume, is soaring. This is causing pain for major Web publishers and impacting how they manage and forecast inventory for 2015, which in turn effects how they project revenue for the year.

Google now believes it has a solution with their Active View product that tracks the viewability of ads served using Google Publisher Tags. According to this video interview with a senior Google DoubleClick executive, 100% viewability of digital ads is possible this year, now the technology is in place to measure this. Ominously she also stated “there will be implications for the economics of the industry should this happen”.

If you’re spending money on online display advertising you’re probably less than happy about paying for non-viewable impressions and so the move to viewable ads can’t come fast enough. It’s likely to be a two edge sword though because, whilst marketers will benefit from knowing that their ads are actually being seen, eliminating non-viewable ads should reduce the supply of publishers’ advertising inventory and thereby raise prices.

5. Google disabled more than half a billion bad ads in 2014

Google is the worlds largest advertising platform and consequently attracts its share of the good, the bad & the ugly. Fortunatly the significant majority of advertisers are good, however Google still has its work cut out fighting bad advertisers & practices which can undermine Google’s reputation as a publisher.

Google have just released their 2014 “Bad Ads” report and it’s clear Google take a very proactive approach. In 2014 they disabled more than 524 million bad ads and banned more than 214,000 advertisers. Ads were disapproved for a variety of reasons including copyright infringements; phishing scams; counterfeit goods; “trick to click” ads; and healthcare-related violations. In addition to monitoring advertisers Google also monitored and took action with publisher websites, disabling more than 160,000 AdSense websites; shutting down more than 250,000 sites for hiding malware, and disapproving more than 1.25 million applications to join the Google advertising network (AdSense).

Whilst there are many things Google can be criticised for, in our view Google have to be given credit for taking these steps which help protect the interests of both advertisers and consumers.