With only 3.5 billion searches a day, Google obviously has to make the most of each and every opportunity it has to make money from showing ads.

But how does Google get more profit from AdWords, after pushing organic results to the bottom of the page? 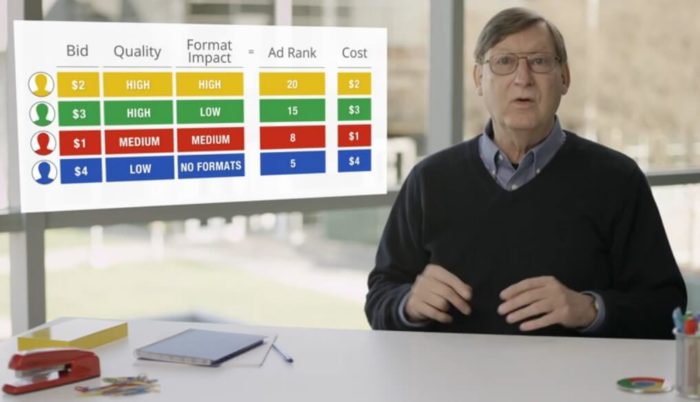 Sure, it might upset Google Chief Economist Hal Varian, but if the only instrument left is a blunt one, why not give an advertiser’s maximum bid greater say in determining ad rank?

Google is still a long way from becoming GoTo (the 1998 search engine, where all results were determined by the highest bidder). But, if nothing else, changes like this encourage competition.

Speaking of competition, while privacy-conscious searchers will know of the search engine DuckDuckGo, another alternative is Oscobo. The name is a Swedish-Latin hybrid that might roughly be translated as “not to track”. The company is based in the UK, so unlike DuckDuckGo can’t be compelled by law enforcement agencies to turn over its user data. Each time you use Oscobo it’s like you’ve never used it before, and that takes some getting used to.

Google isn’t just about AdWords, of course, and its annual developer conference, on last week, is a chance to preview some of the other fun stuff the company and its Alphabet partners are working on. Like Google Lens, for instance, which is a bit like Google Glasses but without the glasses — it uses the camera in your smartphone instead (just be careful where you point it).

And talking about smartphones… what would make an iPhone smarter? Say goodbye to Siri, and hello to Google Assistant.

Google is revising its complicated ad ranking algorithm that determines which ads are shown, how many ads are shown, where they show and how much advertisers pay per click.The bad news? AdWords clicks are likely to get more expensive.

Good news for conscientious AdWords advertisers trying to improve their ads and lower their cost per click.

Make changes and you can now compare current Quality Scores in the AdWords interface with what they were, prior to your changes. It sounds like a small thing, sure, but it’s a small thing that brought us big smiles.

At Google’s annual developer conference, the company showed a new AI-powered visual search tool that makes you and your smartphone smarter. With Google Lens your smartphone camera won’t just see what you see, but understand what you’re looking at and help you take action. Point your phone at a restaurant and you’ll see the phone number, review star ratings and so on.

There’s a lot of things to love about an iPhone, but for many people, Siri, the built-in virtual assistant, isn’t one of them. The good news is that Google Assistant will soon be available for iPhones, and it’s much better at understanding natural language queries than Siri.

Few would argue that Google’s search engine is remarkably effective and generally makes their lives easier. But it comes at a cost — privacy. Practically everything you do online through Google is tracked. Data are then stored, profiled, and sold to advertisers.

Increasing numbers of people are growing concerned about infringements of online privacy and how personal data gets stored and used. As a result, many are turning to alternative search engines which don’t track users. A well-known example is DuckDuckGo which is currently averaging over 15 million queries a day.

There’s another alternative privacy-focused search engine based in the UK called Oscobo. It doesn’t store or share any personal data, so next time you come back to search, it appears to the site that you’ve never visited before – no tailored results will appear. Oscobo doesn’t place cookies or track IP addresses.

Like Google, the search engine is monetised by ads but, unlike Google, ads are neither personalised nor targeted to you.

You’re (still) not tracking CPA properly and here’s why

Retailers Have Long Feared Showroomers. Maybe They Should Love Them Instead

Have you got your head around everything you could be doing to ensure growth and maximise your digital budget?

How about a Free Digital Strategy  Session? Book Yours Online Here