Facebook last week fired the opening shot in what promises to be a long war against ad blockers. 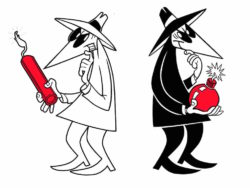 In a blog post announcing more ways for people to control the type of ads they see, Andrew Bosworth (VP, Ads & Business Platform) said the company would start showing ads to anyone using ad blocking software on desktop.

Bosworth argued that the company has done its bit to improve user experience — improving ad targeting, creating more complementary ad formats, and beefing up ad preferences so that it’s easier for people to exclude ads they don’t want to see. And, while its an open secret that some companies are paying ad blockers to ease up on the ads they are blocking, Facebook would instead circumvent any attempt to block ads shown to desktop users.

But within two days of the Facebook announcement, Adblock Plus (a leading open source ad blocker with an active developer community) announced an update including a new filter countering Facebook’s efforts to show ads on desktops.

Later that same day, Facebook told TechCrunch it was already rolling out a code update to address the Adblock Plus update.

Most of Facebook’s ad revenue comes from mobile — only 16 percent comes from desktop. The company’s attempts to thwart ad blockers, then, seems primarily designed to highlight what has become a growing issue for publishers and advertisers alike.

Facebook’s research says that most people use ad blockers to stop “annoying, disruptive ads”. On that basis, if those ads are gone, and users can block ads from businesses that are over zealous in their remarketing, no one should need to use ad blocking software when viewing Facebook.

Facebook is calculating that, if they can stay a step ahead of the ad blockers and if the ads they show no longer irk their audience, people using ad blockers will put up with ads on Facebook. And only a minority will continue downloading new updates to the ad blocking software simply to block Facebook ads.

Win that battle on desktop, and mobile is the next battleground.

It takes a company with the hubris of Facebook to take on the ad blockers, and it’s going to be fascinating to see how this plays out.

We expect the battle will be ongoing. And the end result is anyone’s guess.