In May last year Google acknowledged for the first time it was getting more searches from people using mobile devices than those on laptops and desktops.

That was a significant watershed moment and why “mobile first” has become a key focus for Google.

Mobile search volumes have continued to grow, as evidenced by a recent report released by Hitwise which looked at hundreds of millions of searches in the USA during April and May 2016. They found mobile search now accounts for 58% of overall search query volume.

It’s worth noting that whilst almost six out of 10 searches overall are done on mobile devices, the ratio of mobile to computer search varies quite a bit by industry 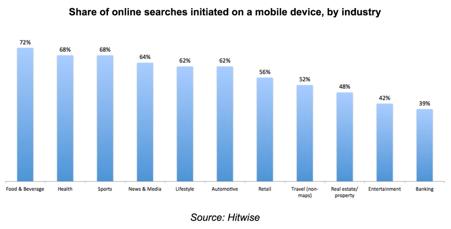 As an agency working with lots of clients in different industries our experience here in NZ is similar. Almost without exception, all clients have had big increases year-on-year in the ratio of mobile to computer traffic they receive. But, as shown by Hitwise, the mix of mobile to computer search traffic does vary by industry.

The growth in mobile search won’t come as a surprise to most readers and probably it’s something you’ve noticed with your own website.

This growth in people using mobile devices to access the Internet is a key reason why Google has been driving the adoption of AMP. As we’ve previously discussed, AMP or Accelerated Mobile Pages is the open source initiative from Google to speed up the mobile web and combat the threat Facebook’s Instant Articles pose.

In February Google introduced AMP content into the Top Stories carousel of mobile news results. The rollout was limited to just 12 countries and excluded NZ, as we mentioned here.

The big news is that last week Google announced it will start including AMP pages within the main organic mobile search results.

According to Google a wide range of non-news publishers have embraced AMP. These include eBay, Fandango, Reddit, Flipkart, TripAdvisor, Disney and the Food Network. Apparently, there are now over 150 million AMP documents in Google’s index and four million more are added each week.

To see how blazingly fast AMP pages are, grab your mobile phone and go to g.co/ampdemo then do a search for “French toast recipe”. You’ll see the result below. 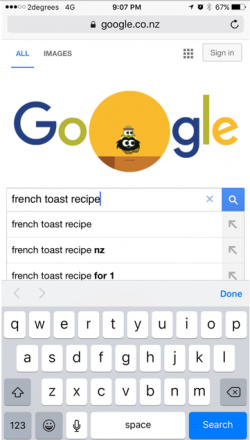 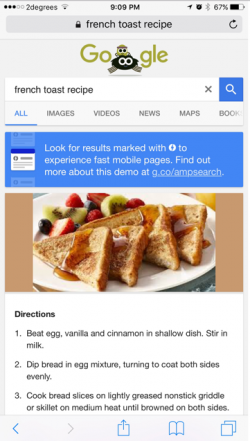 Scroll down and click on the Food Network result (1) which has the AMP lightening bolt symbol and the page will load instantaneously. 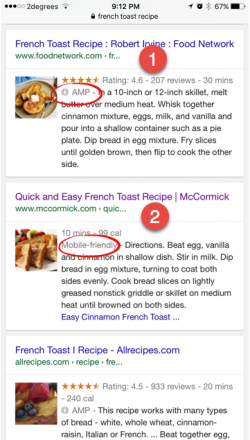 Now compare how fast that is by clicking on the McCormick.com result (2) which is not an AMP page but mobile-friendly page. Even though this is a comparatively fast loading page, it is positively pedestrian compared to the FoodNetwork AMP page which is lighting fast.

While Google is encouraging publishers to create AMP versions of their websites, it isn’t dangling the carrot of improved rankings as was done with the introduction of “mobile-friendly” pages.  Google’s VP of Engineering David Besbris has stated AMP pages won’t receive a ranking boost over mobile-friendly pages, but if there are identical AMP and mobile-friendly versions of a page then Google will serve the AMP page.

Indeed, why should you put time and money into developing AMP versions of your website if it won’t give a ranking boost?

To answer that, Google points out AMP brings some significant benefits to both consumers and publishers, including:

However, at this point, Google has not yet to rolled out AMP into google.co.nz news results. And when it will do the full AMP rollout here in NZ is currently unknown.

But when it does, it’s likely to be worthwhile, particularly for websites that receive a significant proportion of their traffic from mobile users.

We’ll be keeping a close eye on this and recommend you do the same if mobile is important to your business.