Early last month, when some websites reported significant changes in their Google rankings and lost traffic, Google denied any changes to its ranking algorithm.

Google now admits there was a change, with revisions made to the way the quality of website content is assessed.

The update was previously thought to target how-to and informational websites. Among those affected, according to early reports, were eHow, WikiHow, Answers.com and HubPages, the latter a Demand Media site hosting over 870,000 mini-blogs on a wide range of topics.

In a May 11 blog post (titled “The Google update that didn’t happen”) CEO of HubPages, Paul Edmonson, wrote that his site had experienced a 22 percent drop in Google search traffic.

Two companies tracking search traffic – Searchmetrics and SimilarWeb – produced data that also indicated a clear decline in traffic to informational sites. Conversely, however, some informational sites were seeing large gains in rankings and traffic – among them, Quora, Wikia and Epicurious.

Following Google’s admission, what was previously referred to as the “Phantom Update” (or “Phantom Update 2” as this is not the first algorithm change to go without acknowledgement) has now been renamed the “Quality Update”. However, Google remains secretive about the exact nature of the changes, simply saying that it has revised its core ranking algorithm, and changed how quality signals are processed.

These changes are not, as was first assumed, targeting a specific kind of site. And, rather than simply penalising sites with poor content, Google also appears to be rewarding all sites with good content. 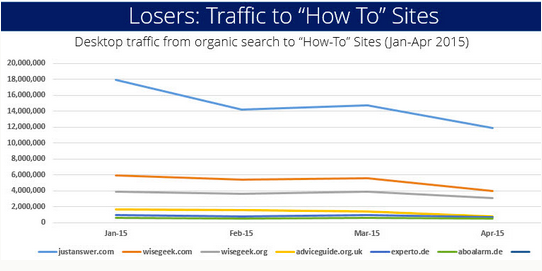 Declining traffic for sites such as Just Answers had many thinking Google’s algorithm update was specifically targeting informational and how-to websites.

Changes to Google’s algorithm can have profound impact, as evidenced by any company unfortunate enough to have fallen foul of Google’s Panda or Penguin updates. Frustratingly, Google search traffic can all but disappear overnight, with no warnings or reasons given. And the impact can be disastrous for the financial well-being of affected businesses.

Any business reliant on Google traffic for its success needs to understand the risks in that dependency. And, in addition to finding other traffic sources, should take steps to ensure that it follows best practice in website content creation and promotion.

Not sure how exactly Google determines what is and what is not good content? Google has addressed the question in the past, and also provides guidance within your site’s Google Search Console (the new name for Google Webmaster Tools).