The day is fast approaching: March 15. Google announced back in September that the “Converted Clicks” reported in AdWords would soon be removed, and what was then “soon” is now imminent. 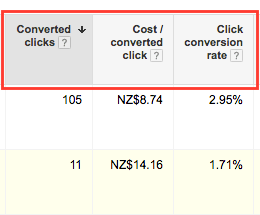 Advertisers should instead be using the Conversions metric for bid and campaign optimisation, as well as reporting, Google advises.

The difference? Converted clicks counts the number of clicks that lead to one or more conversions. If the same person, having clicked on your AdWords ad, completes more than one conversion, there will still be only one converted click.

If you’ve still been reporting Converted Clicks, you’ll soon be unable to do so. However, our recommendation remains to import select conversions from Google Analytics (GA) rather than use Google AdWords tracking — if you’re already doing so, then the loss of Converted Clicks reporting will not be an issue.