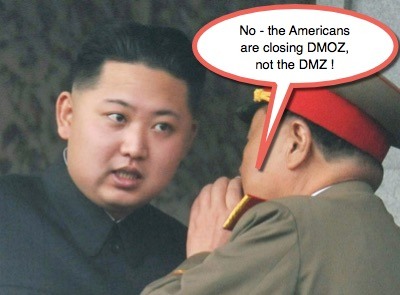 News this week that an iconic online directory started in the same year as Google (1998) is closing.

Many people reading this may not be familiar with DMOZ – otherwise known as ODP or the Open Directory.

For many years DMOZ was an essential element in SEO strategy. Back in the late ’90’s and early 2000’s search engines were comparatively primitive and directories played a key role in how people found websites.

Yahoo started off life as a directory of websites that was edited and curated by humans. To get into Yahoo cost money and so ODP was started as an alternative directory, manned by volunteer editors who would review submitted sites and edit listing descriptions for free. In time, it grew to become the largest directory on the internet with more listings than even Yahoo.

Over the years, ODP has had a number of names. It started life as “GnuHoo”, then became “NewHoo” before being acquired by Netscape and renamed the “Open Directory Project” (ODP). The other weird name it’s known by (DMOZ) is an acronym for “Directory Mozilla” because of the Netscape Mozilla web browser.

Beyond providing a way for people to find websites, both Yahoo and DMOZ quickly became a way for search engines to discover and index websites. Back in the early days of SEO, getting your website listed in Yahoo and DMOZ was an essential step to getting good rankings in search engines. That was because these directories were actively curated and selective about the sites they accepted – unlike many directories which simply accepted any and all submitted sites. Search engines like Google viewed it as an indication of site quality when a website was listed in DMOZ or Yahoo, and so links from either directory helped with rankings.

I recall there was a time when Google even used DMOZ directory listings to supplement their own search results.

The problem is that manually reviewing and curating websites is massively labour intensive and couldn’t be adequately scaled to match the massive growth in the internet. Yahoo tried to address this by adding more human resources but this made them too expensive for many webmasters to use. DMOZ, which relied on volunteers, simply couldn’t keep up with demand and it could literally take many months to get a submitted site reviewed, if it was at all.

At the same time, the increasing sophistication and capabilities of search engines like Google meant directories became less and less used by consumers. The reality is that general directories like Yahoo and DMOZ simply became redundant. Most people would struggle to recall when they last used either – if ever.

At the end of 2014, Yahoo called it quits and closed the doors on its directory. Now, two and a bit years later, AOL, which owns DMOZ, has advised it too will be closing down DMOZ on 14 March.

General directories like Yahoo and DMOZ have ceased being important for a long time. If you look at your web analytics referrals you’ll struggle to find evidence of traffic being sent to your website from DMOZ.

One legacy thing your site may well have – many do – is code telling search engines not to use the DMOZ description in the search results. This is because the descriptions DMOZ presented were very dry and unlikely to encourage click throughs.

With the demise of DMOZ this code is now redundant so can be removed. To check if it’s there, right click a page on your website to look at the source code and search for<meta name=”robots” content=”noodp”/>.