In internet years, 15 years is a lifetime; long enough for most companies to have redesigned and reengineered their websites half a dozen times or more. And when it comes to promoting their new-look websites, Google AdWords has long been a must-have inclusion in their online marketing campaigns.

So it comes as some surprise to realise that in all this time the Google AdWords interface that search marketers have come to know (and some to love) has largely gone untouched. 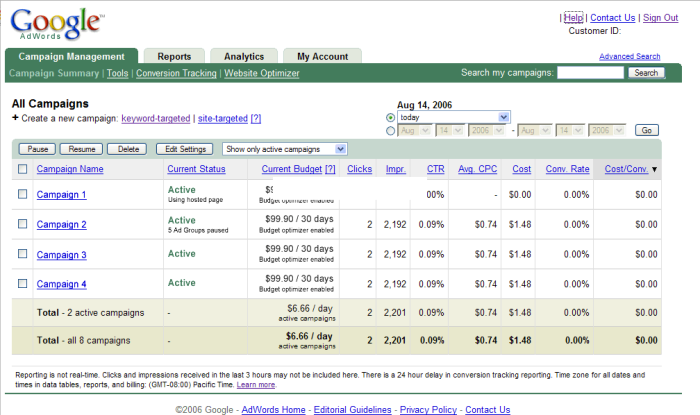 The AdWords interface now looks a lot different than it did in 2006. But it’s also considerably more complex, with a smorgasbord of options likely to confuse new advertisers. No wonder many first timers suffer from the inertia of not knowing where to start, or what default options to change (and why).

Sure, there have been cosmetic changes and navigation updates. And, underneath the hood, Google has all the while been adding new options and features.

But in that time search marketers have gone from promoting sites, to also promoting apps, videos, businesses that don’t even have a website, and even brick and mortar locations.

We advertise to people who are now using smartphones and tablets more often than desktop computers.

And no longer do we simply target consumers based on their search queries or the sites they visit.

The preview screenshot above provided by Google doesn’t give much away but does hint at where AdWords is going. Presentation and navigation appear simpler, while the inclusion of additional charts gives marketers quick visual clues as to ad group performance and performance by device type.

Google announced on Monday that AdWords is about to have its first major overhaul since 2008. According to Jerry Dischler (VP of Product Management, AdWords), the ad platform will be revised from the ground up to provide “marketing in a mobile-first world”. But don’t expect the changes to happen overnight: Google will be inviting advertisers big and small to beta test the changes “through 2016 and into 2017”.

Greg Rosenberg, head of UX, advertiser platform at Google, says that AdWords, when rewritten eight years ago, was still built for a world in which desktop was dominant. “Today,” he told Fast Company’s Mark Wilson, “we’re in the middle of the biggest shift the ad industry has seen since AdWords launched — mobile…Our current product is just showing its age.”

Google’s intent is to streamline workflow, surfacing reporting insights while simplifying navigation. The company hopes to make campaign setup an easier process, while also changing the focus from keywords and, we surmise, shifting it to audiences and device types.

AdWords, of course, provides all but a fraction of Google’s revenue, and the company can’t afford a misstep (like Yahoo’s Panama). That’s reason enough for a cautious and lengthy rollout; one that solicits, reviews and incorporates user feedback on the way to final release.