As we previously reported, back in Feb Google & Twitter resurrected a deal which would allow Google to start featuring Tweets in search results. This has fuelled increasing speculation that Google may eventually purchase Twitter, particularly given the failure of Google+ and the increasing competition from Facebook.

Tweets have been appearing in Google’s mobile results for several months now and over the last week they’ve started to show in desktop results.

For trending topics Twitter results appear near the top of Google search results, as these results for Donald Trump & Taylor Swift show. 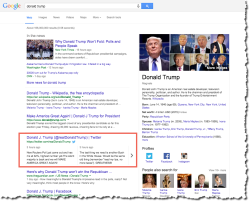 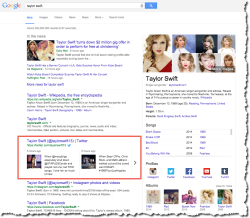 (Apologies to Taylor Swift for associating her with the idiot Trump)

More to the point, the official Twitter account results for larger brands are now showing – generally at the bottom of page one, as this result for Vodafone shows. 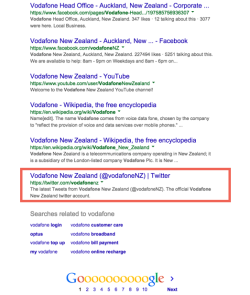 A study back in June by Stone Temple Consulting showed that the number of Tweets indexed by Google since Feb had increased from 0.6% to 3.4%. Whilst that meant 96% of Tweets weren’t being indexed, this is expected to grow further now Google is showing Tweets in desktop results.

There is speculation Google may expand the Tweets shown for brands beyond just showing those from a brand’s official Twitter account and include Tweets from individuals about the brand. Should that happen it could mean that the negative Tweets of disgruntled consumers will get far more exposure than they currently get on Twitter alone, and so be more damaging.  Of course, on the flip side, positive sentiment Tweets will also get more exposure.