Google has announced it’s about to start testing dynamic insertion of television ads targeted to consumers’ viewing habits and locations. The trial, due to start in a few weeks, will initially be limited to Google Fiber TV subscribers in Kansas City. 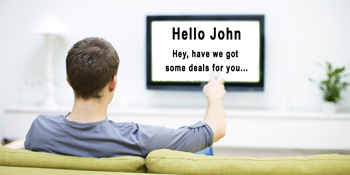 According to a Google Groups blog post “Fiber TV ads will be digitally delivered in real time and can be matched based on geography, the type of program being shown (sports, news, etc.), or viewing history.”

Google’s local ads will be shown in existing ad breaks, along with national ads.

Viewers can opt out from being shown ads based on their viewing history. Advertisers, meanwhile, will only pay for ads that have been shown, and can limit the number of times their ad appears on a subscriber’s television.

Not only will ads be inserted on live TV programs but also on those recorded on DVR. When subscribers choose to record a program to DVR for watching later, local ads will be current for the time of watching (not recording). In other words, viewers won’t be shown an ad for a sale that was on a week ago, but one on now or later in the week.

For advertisers and consumers, this Google trial represents a taste of things to come.

Advertisers don’t have the same control over TV campaigns that they have for online ad campaigns. For that reason, they should welcome improvements in measurement and targeting, and payment that’s based on the number of times their ads are shown.

That said, this is an early and small trial (according to research firm MoffettNathanson Google Fiber TV has just under 30,000 Kansas City subscribers). Furthermore, Google is keeping the ad targeting quite simplistic due to privacy concerns (it will not, for instance, target consumers based on their web surfing habits).