As we’ve previously reported, Mobile has become a prime focus for Google with more than half of all searches Google receives globally coming from mobile devices. 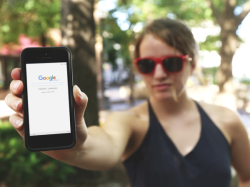 If anyone remained in doubt about the growing significance of mobile, figure released last week should put paid to that. According to a report released by comScore US desktop search volumes peaked in 2013 and since then have been in gradual decline as people increasingly access the internet from their mobile phones. 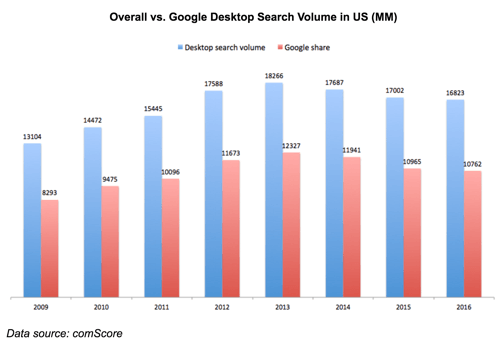 This is hardly surprising, given that most modern mobile phones have significant processing power and in reality are pocket computers. This, plus bigger screens and faster and cheaper mobile connection plans have all contributed to mobile becoming the primary method many of us use to access the internet. We know from our own website analytics data that one in three people reading this article will be doing so on a mobile phone or tablet

This growth in mobile explains why Google reportedly paid Apple around USD$1 Billion in 2014 to remain the default search engine on iPhones. That’s an astounding amount of money in any terms and clearly shows how much revenue Google generates from mobile advertising displayed on iPhones – even though they pale in market share to Android devices.

To increase the number of searches Google gets from iPhones, Google is apparently about to release a third-party keyboard. iPhone users will be able to replace the native iPhone keyboard with Google’s keyboard which will feature swiping/gesture-based typing and predictive text.

If you own an iPhone you may not be aware that since the release of iOS 8, Apple has allowed third-party apps to replace its own keyboard – the two most popular replacement keyboards being Swype and Swiftkey.

The fact that Swiftkey was acquired earlier this year by Microsoft, owner of rival search engine Bing, no doubt played a part in Google’s decision to create its own iPhone keyboard.

How good this will be and whether it’s adopted in significant numbers and drives increased Google searches from iPhones remains to be seen. However with Google’s growing mobile revenues we can be sure they will be doing all they can to drive adoption.

Whether or not you own an iPhone or have any plans to replace its keyboard, the main significance of this story to online marketers is that it reinforces just how critical mobile is to Google as a channel. Consequently it probably should be a similar focus and priority for you too as an online marketer.