Intelligent search battle is heating up – Google ups the ante

The rise of intelligent conversational search bots means things are getting easier for users but more complex for publishers and advertisers.

A couple of weeks ago we ran a story about Viv – a clever new artificial intelligence digital assistant bot that potentially could become a market disruptor for Google. Viv is a conversational bot which can understand complex voice commands and complete tasks for you.

Not surprisingly, Google hasn’t been sitting on its hands waiting for their world to fall apart. At the Google I/O developers conference this week Google announced “Google assistant” which Google’s CEO, Sundar Pichai, described as heralding the next evolution of Google.

During his opening keynote speech, Pichai said, “It’s not enough to give them links. We really need to help them get things done in the real world. This is why we’re evolving search to be more assistive.”

In Google’s official blog Pichai states “…we believe we are at a seminal moment. People are increasingly interacting naturally with Google, and aren’t just looking for the world’s information but actually expecting Google to help them with their daily tasks.”

Like Viv, Google assistant interaction with users is a two-way conversational dialogue that not only provides information but can take actions.

Rather than being a standalone app, Google assistant is a platform that will be incorporated into things such as Google Home, a voice-activated home automation assistant Google is releasing later this year to compete with Amazon’s Echo (which features the Amazon Alexa assistant bot).

Microsoft clearly doesn’t intend missing out on this next big trend and is building “Bing Concierge” which is a bot that will be able to respond to users over platforms like Skype, Messenger, SMS, WhatsApp, and Telegram.

Microsoft has described the bot as follows:“The agent does what a human assistant would do: it runs errands on behalf of the user, by automatically completing tasks for the user. The users talk to the agent in natural language, and the agent responds in natural language to collect all the information; once ready, it automatically performs the task for the user by connecting to service providers. For example, the user might ask ‘make me a reservation at an Italian place tonight’, and the agent will respond with ‘for how many people?’; after several such back-and-forth turns it will confirm and book the restaurant that the user picked.”

Google stated at their I/O conference that currently one in five searches done on their search engines is by voice, rather than text. Similarly, Bing recently advised 24% of their searches are by voice. Developments like Google assistant, Bing Concierge, Viv and the like are only going to accelerate this trend, particularly given the fact that now more searches are done from mobile devices than desktop computers.

A survey from MindMeld highlights the growing adoption of voice search in the last 12 months. 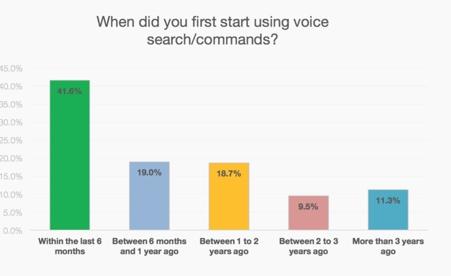 This is going to have big implications from a search marketing perspective – both SEO and PPC.

In the past when people have typed searches into their mobile phones the number of words used has generally been kept to a minimum because typing on a phone keyboard is fiddly compared to a full-size computer keyboard. Similarly, when voice activated search first came out people learnt very quickly to limit the words used and it was necessary to talk in an almost robotic way to be understood – especially if you didn’t have an American accent.

Today Google has amazing voice recognition capability and so people are increasingly using their voices when searching on their phones because it’s easier and faster. A consequence is they’re using natural language search queries which, by their nature, are longer and more complex.

Many websites are seeing a rise in impressions for longer-tail searches and question-based search phrases because of this trend. The trick, of course, is to tap into these growing impressions, turning them into clicks and conversions.