Microsoft changes tack on ‘Do Not Track’

Microsoft has announced that future versions of its Internet Exporer web browser (and upcoming replacement, code-named Spartan) will no longer enable Do Not Track (DNT) by default. Other web browsers such as Chrome and Firefox already require that users opt in to DNT.

When enabled, Do Not Track tells websites and their advertisers the user’s preference is to opt out of third-party tracking for advertising purposes. 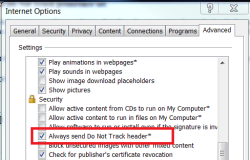 When Microsoft enabled DNT by default for users who chose “Express Settings” in Windows 10 and IE10, the company was heavily criticised by industry groups (including the IAB and the World Wide Web Consortium, or W3C).

Advertising networks also objected. They had previously agreed to honour DTT requests so long as they were not the default setting in web browsers.

The number of companies honouring DNT requests has been low, as a consequence.

Microsoft Chief Privacy Officer Brendon Lynch said the reason for the change is to comply with the latest draft of the official W3C standard for Do Not Track. This requires that the choice not to be tracked must explicitly be that of the user, not that of the vendor.

As advertisers, we want to obtain and use as much tracking data as might be available, without prejudicing individual privacy. This data allow us to target consumers with the content and advertising that we think most relevant to them, and not waste time and money with consumers who really have no interest.

DNT may already be dead – after all, some fairly large companies and websites (among them Yahoo, AOL, Apple, Facebook and LinkedIn) have said they ignore DNT requests. But Microsoft’s about face may yet help increase DNT compliance, as might the upcoming release for approval of the final W3C Do Not Track standard.