Millenials — people in the 18-34 year old age group — typically scroll down through smartphone content two and a half times faster than people in their 60s, according to Facebook.

And because scroll speed varies dramatically between users, the company argues that detemining ad viewability based on an absolute measure (such as two seconds) does not work. Ad viewability needs to be measured relative to an individual’s normal scrolling speed says Facebook’s director of ad product marketing, Graham Mudd. 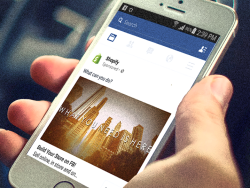 Mudd told Advertising Week last month that “value is created the moment an impression is made” and that “people have hugely individualized ways of consuming content.” He added, “…for a given ad campaign, if they’re spending twice as long looking at that ad as they typically look at ads, then that signals to us that this must be relevant and we go and look for more people like that and use all the data we have about people, their profiles, to go find audiences.”

Facebook does allow advertisers to pay only when an entire ad has passed through the viewer’s screen, but does not have a minimum viewing time.

Advertisers buying mobile ads on a CPM basis are rightly concerned that they only pay for mobile ads that are actually seen. But tracking ad viewability on mobile devices is more challenging than on desktops.

Our advice? If viewability is a concern, buy mobile ads on a Cost Per Action basis such as cost per download, cost per call or cost per click.