Mobile ad spend overtakes desktop (or does it?)

Marin analysed its US accounts, accumulatively spending $US 7.8 billion a year, and announced that for the first time more than half of digital ad spend is being spent on mobile ads.

According to Marin, social ads are dominant, accounting for 75% of mobile ad clicks. However, both display (60% of conversions are on mobile) and search (clicks are up 13% year on year) show strong growth.

If Marin’s estimates prove accurate for the world’s largest ad market, what of the rest of the world?

Publicis’s ZenithOptimedia reported last week that it predicts mobile ad spend will increase 128% through 2018. At that point it will come close (but no cigar) with 18.7% of global ad spend (compared to desktop, with 19%).

Marketing intelligence service Warc projects that around the world mobile ad spend will double while desktop declines, and in 2017 will account for 44% of all online ad spend. Not quite half, then, with desktop at that point still the winner. 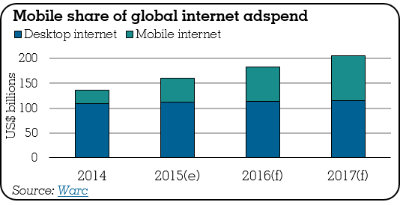 Surprised? We’re not: Marin said this time last year that mobile would eclipse desktop ad spend by end of 2015.

Google is also on record as saying that mobile search volumes now exceed desktop searches in more than 10 countries (including the US). This, then, is simply a case of the ad dollars being spent where the audience is — and increasingly that’s on smartphones, not on desktop computers.

As to whether we’ll all get there by 2017 or 2018 or 2019 — well, that’s largely irrelevant. The point is that consumers are increasingly using their smartphones to find websites and seek out information.

Advertisers need to remember that mobile advertising isn’t the same as advertising on desktop. Not only are screens smaller, but what people want and what they are trying to do can be vastly different. Typically, there’s also an immediacy factor (what Google calls “micro-moments”) that comes into play: not only do consumers want specific information, but they want it now.

If your paid search campaigns have been losing ground over the past year, chances are you need to focus on improving the performance of your ads on mobile devices.

Not sure where to start? We’re only a phone call away.