“Mobilegeddon” – Did the Earth Move for You?

Over the last few weeks there have been increasingly melodramatic headlines regarding the impending roll out of Google’s mobile-friendly algorithm which many in the SEO world have given the somewhat daft moniker “Mobilegeddon”. And it’s not only the editors who’ve had fun with headlines – graphic artists have had a field day. Some examples below:

April 21, the launch date of “Mobilegeddon”, has now come & gone. So has it had the earth shattering impact on mobile search results predicted? (Remember Google advised it will have more of an impact than the Google Panda and Penguin updates did, and those were game changers for many websites).

Or has this been a case of Chicken Little and the Sky is Falling? 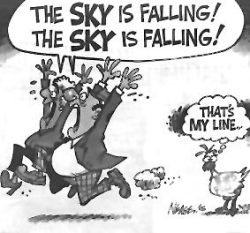 Less than a week after roll out it’s still too early to say but, as Google did warn, it would take a week or so for the global roll out.

Data analysis company Searchmetrics has released a preliminary report of winners & losers in US mobile search results.  Their report assesses which companies gained or lost the most in visibility in Google’s US mobile search results. Frankly the data looks a bit thin at this point, but according to them news sharing site Reddit topped the list of losers, followed by NBC Sports, Vogue, SongLyrics and Bloomberg Business.

Like others in the search industry, SureFire has been closely watching mobile search results and traffic, but at this point there doesn’t appear to have been any noticeable impact for any of the NZ sites we’ve been monitoring. It’s very early days however and things may well change over the next couple of weeks.

One thing Mobilegeddon definitely has done is to encourage many webmasters to make their sites mobile friendly. Google announced last week a 4.7% increase in the proportion of sites that are “mobile friendly” since they warned about the impending Mobile Friendly Update back in Feb.

If you made your website mobile-friendly in anticipation of Google’s Mobile Friendly Update you may be wondering why you bothered, given the apparent non-event so far. And if you’ve not changed your site you might be thinking you dodged a bullet. Be aware it’s still very early days and in a few of weeks there are likely to be clear winners & losers if the assessment by Google that this will have more impact than the Panda and Penguin updates is correct.