Nielsen captures all with Total Audience

According to Adweek, the company that’s synonymous with measuring TV audiences worldwide is preparing to roll out a new product that tracks audience views across all platforms. Tracking coverage includes TV, of course, but also DVR, VOD, connected TV devices (such as Apple TV), mobile, desktop PCs and tablets. What’s left out? For the moment, just streaming content on wearables like Apple Watch. 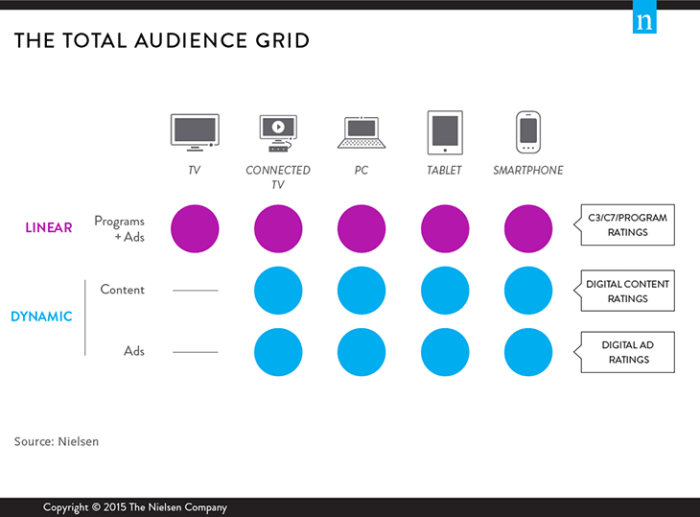 Adweek previewed the tool, noting that it allows users to “break down programs by categories like unique audience, reach, gross average minute audience (both in viewers and GRP—gross ratings point, where one GRP is equal to 1 percent of TV households), minutes viewed and frequency (the average number of exposures to a show or network)”.

Adweek also notes that Nielsen can remove duplicate views by the same person on different platforms from total numbers.

Ad viewability measurements, including video, by demographics will also be available by the end of the year.

TV advertising remains comparatively expensive despite declines in viewership, but marketers will welcome what promises to provide a more complete picture of audience reach.