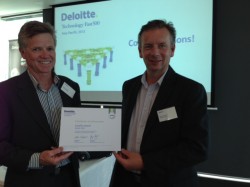 Late last year SureFire entered the Deloitte NZ Fast50 which recognises the fastest growing businesses in NZ by revenue % growth over the last couple of years.

Unfortunately, despite having had huge revenue growth over the last couple of years, we still didn’t make it into the Top50 because being around for 11+ years we came off a high base & growth is recognised as % growth rather than absolute $ growth.

However the surprising good news is that we did make it into the Deloitte Technology Fast 500 Asia Pacific index. This recognises the region’s fastest growing tech businesses & was announced in Hong Kong. We were ranked 330.

Thanks to the SureFire team for helping make this happen & congratulations to the other NZ companies that also made it into Deloitte Technology Fast 500 index.