There’s significant differences between Android and iOS users – at least in terms of how they use their smartphones and tablets and experience advertising. That’s according to Mediatel, a UK media information company whose Connected Screens survey tracks how consumers use multiple digital screens in their lives.

Much the same was true in terms of static advertising: 39% of iOS users saw static ads most days, compared with 28% of Android users.

iPhone users were also far more likely to shop via their device, Mediatel reported: 57% had done so compared to 40% of Android users. Notably, nearly a half (46%) of Android tablet users never make purchases on their devices, compared to less than one in three iPad users.

Commenting on the report, Mediatel’s Richard Marks said “It could be argued that perhaps iOS is an easier system on which to see ads and make payments, but it would seem that this e-commerce difference is more indicative of a tendency of iOS users to use their iPhone more frequently generally than Android users,” he said.

While Mediatel’s survey was limited to UK users, smartphone owner demographics in other markets support what seems another likely reason for this difference in usage. Simply put, iOS devices are more likely to be owned by women, particularly those in the 26-to-35 age group. And they’re more expensive than Android phones.

We suspect that another reason for the differences in ad exposure are market-driven: advertisers’ demographic targeting will often favour women in the 26-35 age group, even to the point of paying more for iOS ads than those appearing on Android devices. 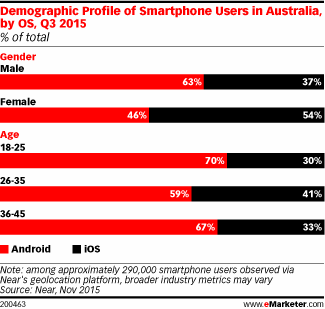 Citing Near’s international surveys of smartphone users, eMarketer reports that in less-developed digital markets, the vast majority of all demographic groups have Android-based phones. While iPhones are relatively popular in Australia, as in other countries it’s also true that both younger and older smartphone users tend to own Android phones.

AdWords advertisers not already doing so might want to consider up-weighting mobile bids and budgets for display campaigns by operating system, depending on the age and gender of those they wish to engage. Unfortunately, neither Google nor Bing offer the ability — as yet — to vary bids by mobile OS on search campaigns.