TVNZ are missing out on 444,000 Opportunities Every Night

You need to know your audience and follow them rather than hope they will stay loyal to the platform you are using.

Imagine the uplift in engagement if after each episode one of the cast jumped on the FB page and held a live Q&A and/or took the fans through some of the behind the scenes action while setting up the teaser for the next episode. A perfect opportunity for product placement, live streaming ads, and a platform to take an already passionate fan base to a new level.

This strategy has already been around for some time and there are now even TV “aftershows” that are nearly as popular as the programs themselves (eg Talking Dead, Talking Saul & Talking Preacher – all featuring Chris Hardwick as the presenter/host).

We already have reality shows dominating the TV space with multiple viewing nights each week so and smashing it in the rating wars so there should be no fear of oversaturation.

Show trailers on the Shortland St Facebook page regularly hit over 40,000 views so engagement and uptake should not be a problem with a ready-made highly targetted audience in the right demographic and it would not take a huge leap in production cost or technology to execute. 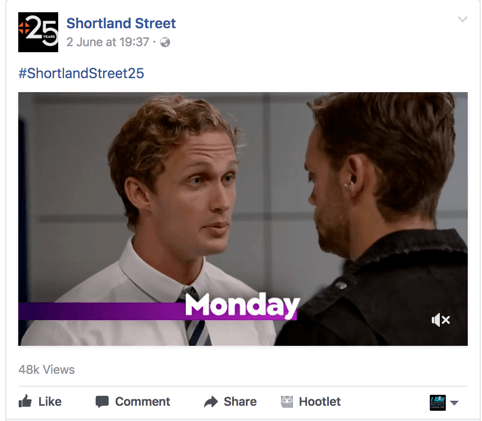 Why oh Why hasn’t TVNZ followed it shrinking audience and monetised the social audience then?

PROBLEM: Apparently TVNZ does not own the Shortland Street Facebook Page – South Pacific Pictures does.

If I was TVNZ or South Pacific Pictures I would be renegotiating contracts quick smart with the options for social streaming and control over the Shortland St FB page and monetization of Social Channels.

REMEMBER: Know your audience and follow them rather than hope they will stay loyal to the platform you are using. Strategies from 10 yrs ago or even 2yrs or 2 months ago may not be as effective today.

If you want to talk about where your audience is today and how to reach them effectively schedule a 45 min call with me here http://calendly.com/glenn-marvin