Did you know that about 75% of people in the world live in places with inconsistent, complicated or inadequate addressing systems?

This means that around 4 billion people are effectively invisible and unable to report crime; get deliveries; or receive aid simply because they have no way to formally communicate where they live.

Even in countries with advanced address systems like NZ and UK, people get lost, packages aren’t delivered, and businesses and tourist attractions don’t get found.

To address this problem a British startup called What3Words has recently launched a brilliant new location and addressing system which gives everyone and everywhere on Earth a simple address. It does this by assigning a simple three-word address to every single 3 x 3 metre square of the entire planet.

Each of the 57 trillion 3m x 3m squares in the world has been pre-allocated a fixed and unique 3-word address. A geocoder turns geographic coordinates into these 3-word addresses & vice-versa.

The system is available in multiple languages — not just English. Currently, nine languages are available (English, French, Spanish, Portuguese, Russian, German, Turkish, Swedish and even Swahili). More are being added every month — Italian, Greek, and Arabic will soon be available.

Using words means non-technical people (and that’s most of us) can accurately find any location and communicate it more quickly, more easily and with less ambiguity than any other system like street addresses, postcodes, latitude and longitude or mobile short-links.

What is especially cool is the What3Words app (free IOS and Android versions available) functions without a data connection. In other words, it works offline. This solves a perpetual constraint when in remote and unaddressed locations, or in areas with poor connectivity. The app shows both maps and has a compass function to direct users to off-street locations.

The system is being rapidly adopted around the world by all sorts of organisations and businesses. Apparently, in Mongolia the post office has already started using the system to deliver the mail! DuckDuckGo, the alternative search engine, has integrated what3words into its platform allowing users to search for 3-word addresses directly from its search bar.

I learned about What3Words from Radio New Zealand’s excellent “This Way Up” show that Simon Morton presents on Saturday afternoons. Simon interviewed Chris Sheldrick, the founder and CEO of What3Words and it’s well worth listening to. Click here for the podcast.

What3Words is likely to be massively useful to many NZ organisations and individuals. Here are some ideas that immediately spring to mind:

1) Shops in Malls
Often locating a particular shop in a large shopping mall like Sylvia Park can be difficult. And because shops are not on street-front locations but deep within a mall, navigation apps like Google Maps are of limited help. However, if a prospective customer has the What3Words app on their phone they can search for the store name and then be guided to the exact location.   So it makes sense for businesses to advertise their What3Words address and include it on their website. Below is an example using Noel Leeming, Sylvia Park. 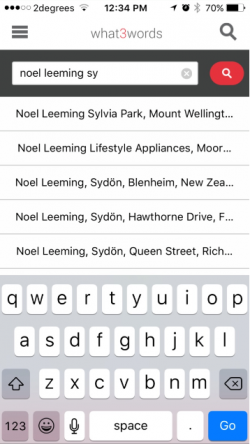 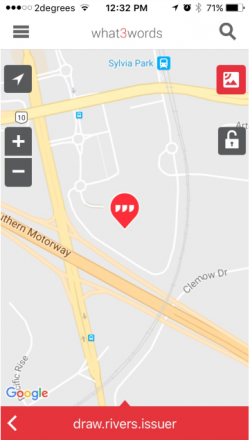 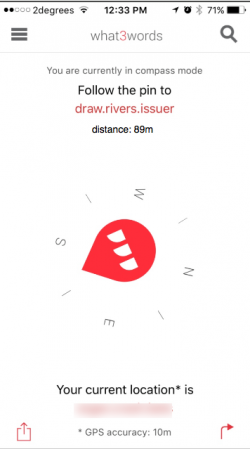 2) Mobile Businesses
For mobile businesses, such as a mobile coffee van that regularly attends event venues, What3Words will be brilliant. By sharing their What3Words address via a Facebook post or Tweet to loyal customers they can let them know precisely where they are at the venue.

3) Car Parking
Ever parked your car in a large car park like Auckland Airport and then later walked around in ever diminishing circles trying to find the damn thing? Yup, we all have! With What3Words on your phone you just need to lock your location pin when you park the car and then finding it later is a breeze. 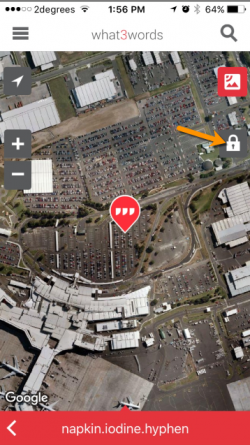 4) Car Dealerships
If you’ve ever wandered around a large car dealers yard after hours trying to locate a particular car you’ve seen advertised, it can be pretty frustrating.  But not if the dealer listed the What3Words location address of each vehicle.

5) Major Events
Ever tried meeting up with mates at a crowded sports stadium like Eden Park or a concert venue like Christmas in the Park in the Auckland Domain? With multiple entrance gates and thousands of people milling around it can be next to impossible. But not if you have the What3Words app on your phone – you simply share your pin location with your friends who can then use the compass function and locate your exact position to within 10m. 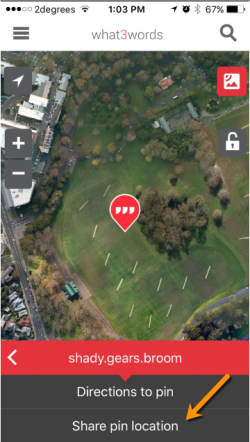 Yes, I’m besotted with this and think it’s brilliant. These are just some ideas that spring to mind and there will be plenty more ways this can be used, both by individuals and businesses.

Let us know any ideas you have by commenting below.