Why Google depends on Apple

We all know that Apple and Samsung are rivals engaged in a bitter battle to win the war for smartphone supremacy. Less people are aware of the irony that, despite being competitors, Apple is one of Samsung’s most important customers because Apple continues to rely on Samsung for the chips that power iPhones & iPads.

Interestingly a similar irony exists between Apple and their Android nemesis, Google. Once both companies enjoyed a very good relationship and Google’s CEO, Eric Schmidt, also sat on Apple’s board. That was until Google became a competitor to Apple with the launch of the Android mobile operating system.  Steve Jobs was incensed by this and famously stated, “I will spend my last dying breath if I need to, and I will spend every penny of Apple’s $40 billion in the bank, to right this wrong. I’m going to destroy Android, because it’s a stolen product. I’m willing to go thermonuclear war on this.”

However the rest, as they say, is history and Android subsequently grew to become the dominant mobile operating system globally. (In 2014 more than a billion Android devices were sold, which was about five times the number of Apple iOS devices sold).

Despite this rivalry a commercial relationship exists between Apple and Google, the significance of which became apparent last week when the New York Post quoted a recent analysis by Goldman Sachs. This estimated that Google collected about $11.8 billion on mobile search ads in 2014, with about 75% coming from ads on iPhones and iPads.

In 2014 Google’s total ad revenues was $59 billion, which means that about 20% of Google’s revenue is from mobile ads – no wonder Google is focussing so much on mobile.

And with $8.8 billion of this advertising revenue coming from iPhones & iPads, Google has, ironically, developed a huge dependency on their IOS rival, Apple.

A dependency Apple is well rewarded for. Morgan Stanley estimated in 2013 that Google paid Apple over $1 billion annually for the privilege of being the default search engine in Apple’s Safari browser.

We’ve mentioned previously that the Google’s deal with Apple to be the default search engine for Safari ends this year and speculation is rife that both Yahoo! and Bing each want to usurp Google’s position. There’s even talk of Apple rolling out their own search engine to challenge Google.

It will be interesting to see what eventuates and who knows, maybe Steve Jobs will get his revenge after all. Clearly there’s an astounding amount of money at risk for Google. And the stakes will only get higher based on estimates from eMarketer that next year mobile SEO and PPC spend will overtake desktop search marketing spend. 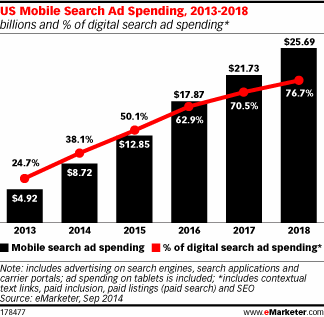 Beyond any fascination there may be watching all the Machiavellian moves of these titans, what this should do is reinforce to you the significance of mobile. It’s the future. And it’s here now.

Ignore it at your peril.