Software that blocks most types of advertising on mobile devices is being deployed by European wireless carriers, according to a recent report in the Financial Times.

The company behind the software, Israeli start-up Shine, says its software prevents advertising from loading in web pages and in apps, but does not affect newsfeed ads appearing in Facebook and Twitter timelines. Pop-ups, auto-playing videos and other forms of digital advertising can consume 10–50 per cent of a mobile subscriber’s data plan each month, Shine says. 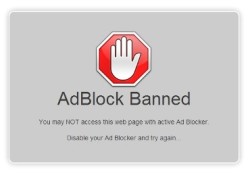 According to the FT report, several European carriers are planning to install the software in their data centres and at least one has already done so. In addition, Shine has previously claimed that at least one US carrier is planning to use its technology to block ads.

The unnamed large European carrier plans to launch an opt in advertising free carrier service later this year. Subscribers paying for the service would apparently benefit from faster load times for web pages, greater privacy (their behaviour would not be tracked for the purposes of ad targeting), and less risk from exposure to malware (which can be introduced through hijacked ads).

The same carrier also plans to block Google’s ads for an hour or two a day unless it is paid a share of the ad revenue generated by its subscribers.

Many European mobile operators reportedly resent having to provide the bandwidth and infrastructure required to support data-heavy advertising while it’s the digital media companies who profit. Google counters that it provides free services that are reliant on advertising revenue for their existence, and that it invests in its own infrastructure including the data centres powering YouTube, Gmail and other products.

While we may be a long way from the thick of the battle, an important showdown is looming with repercussions that will soon become evident.

PageFair and Adobe have reported there are about 144 million users globally who are actively using ad blocking software. That’s about five percent of Internet users, but that number is growing (with 70 percent growth in the last year).

As ad blocking usage increases, free content providers will start charging for their services, discontinue them, or start denying access to users with ad blocking software.

The plan to filter out Google ads could well violate net neutrality rules requiring that all data be treated equally, and could simply be a ploy to force Google into negotiations. That said, Google (along with Amazon and Microsoft) has set a dangerous precedent in having paid German startup Adblock Plus not to block ads on its sites.