In most markets Google is the dominant search engine by a significant margin. No more so than in NZ where, according to latest Hitwise figures, Google’s share is 92.8%.

Add in the fact that YouTube, also owned by Google, is the 2’nd biggest search engine globally & it’s clear Google dominance of the NZ search market is almost total. 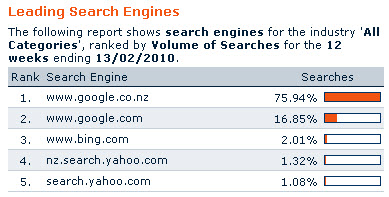 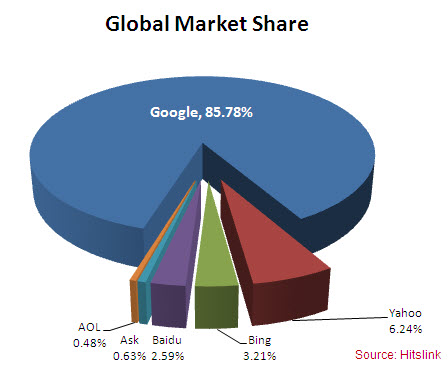 Despite this, Google is clearly the #1 search engine globally. According to latest figures from Hitslink Google’s global share in January exceeded 85%.

In many quarters growing concern is being voiced about Google’s increasing dominance and the associated market control it brings. Given this, it’s not surprising that the Yahoo & Microsoft combined search and advertising arrangement has just been given clearance by both the European Commission and the U.S. Department of Justice.

Clearly the hope of these regulatory bodies is that the combined strength of Microsoft & Yahoo! will present Google with a serious competitor & keep the market competitive.

Whether this will be the case remains to be seen, given Yahoo’s share of the U.S. search market has been steadily declining. In January 2010, its share had dropped to just 14.63% compared to Bing’s share which had grown to 9.64% according to Hitwise. Most of Bing’s growth seems to have been at Yahoo’s expense rather than Google’s.

Merging these is going to be a BIG job & won’t happen anytime soon. According to a joint statement issued on Feb. 18, the two companies “hope to make significant progress transitioning U.S. advertisers and publishers prior to the 2010 holiday season, but may wait until 2011 if they determine the transition will be more effective after the holiday season. All global customers and partners are expected to be transitioned by early 2012.”

Given Microsoft adCenter doesn’t currently operate in Australia & NZ, I don’t think we’ll be seeing Google’s domination on the PPC advertising market in this part of the world challenged by Microsoft/Yahoo in the foreseeable future. Any more immediate challenge is likely to come from different quarter altogether.

And that’s Facebook…something we’ll discuss in a future post.