So you want to dip your toe in the social media pool, and why wouldn’t you? After all, There are more than 30 million active users on Facebook, Twitter has an estimated 6 million active users and growing, not to mention the hundreds (if not thousands) of niche social media sites, all of which host communities of highly targetable individuals waiting to see what you have to offer.  But, before you dive in, here are a number of considerations which will help you catch the wave to social media superstardom.

Social Media sites require users to identify themselves by way of a username. Depending on the amount of anonymity you want to preserve, the best usernames are typically your real name, a current Internet pen name, or a new name that can be closely linked to you, your company, or the topic that you wish to be identified with.

“What’s an avatar?” I hear you say. An avatar is a computer user’s representation of himself/herself. These are usually icon like images that depict something about a person’s identity. As the saying goes “a picture paints 1000 words”, which is why the use of avatars are so popular with the social crowd. I recommend that you make your avatars a clear photo of yourself, company logo, or of an image that is easily identifiable and unique to you.

Again, some great examples of avatars can be found on Twitter with the likes of CNN, BBC, TVNZ and even Barack Obama all using easily identifiable logo’s to accompany their user profiles.

There is nothing worse that the new kid on the block who has a bad case of verbal diarrhoea. A sure way to be shunned in social media circles is to blurt out whatever is on your mind without first listening to what is been said. Start by taking note of the key topics being discussed, the language being used, and who is saying what. Identify the opinion leaders in the group and befriend them by asking a few questions. Once you gain a better understanding of how the group interacts, you will be better equipped to successfully integrate into the group. 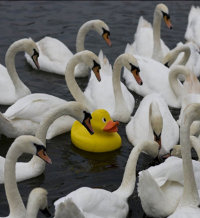 Once you have identified that the group you have joined is a right fit for you. Your next goal is to build your social presence. Make friends, DIGG (vote for) articles, share links to relevant content (your content), ask questions, make comments and share your opinions. By opening a two way dialog with the group you will learn a great deal about people’s perception of you, your brand, or what you want to be identified with, and you will also be able to share your message with the group.

When it comes to being active, Barack Obama’s use of social media during the lead-up to the 2008 US elections cannot be ignored. Even before then senator Obama announced his candidacy for presidency of the United States he had already began an open dialog with members of Facebook and had attracted over 250,000 fans. To put this into perspective, then favourite Hillary Clinton had around 3,000 followers and the Clinton camps line of communication was sporadic at best.

Another example of how Obama actively used social media was through Twitter. The Obama camp took the approach of following most of the twitter members who followed Barrack. In contrast, the Clinton camp did not follow any of those who followed Hillary. This resulted in approximately 970% more people following Obama.

Multiple personality disorder might be kind of entertaining at first, but people generally run a mile when they’re not sure who’s going to come bounding through the door, Dr Jekyll or Mr Hyde. Whilst it generally makes sense to separate professional and personal social media identities, you don’t want to have 5 different usernames for 5 different social media sites and be mixing together lots of unrelated topics. It will make it damn near impossible to define your personal brand and it will also diminish your ability to develop a network of friends/followers across numerous social media sites.

Whilst there are a number of excellent tools which assist in communicating your messages across multiple social media platforms, it is still a good idea to pick a few sites that provide you with the most value and establish a name for yourself rather than just being present.

Contiki Holidays are a great example of a company who have not spread themselves too thin.  Contiki’s main focus has been on building a community on Facebook and they currently have 45,000+ active members and growing. They also have profiles on Twitter, but Facebook is their major social media platform and they actively promote their Facebook profile from their Twitter account and corporate website. By focusing mainly on Facebook Contiki are able to easily and effectively manage their dialog with community members.

By creating an easily identifiable persona and taking a unified approach to your social media efforts you can, gain brand exposure, increase website traffic, make friends and influence people.